ANTHRAX's FRANK BELLO: Why Now Was The Right Time For Me To Write My Memoir | SoundPark music community!

ANTHRAX’s FRANK BELLO: Why Now Was The Right Time For Me To Write My Memoir

During an appearance on the «HardRockCore» podcast, ANTHRAX bassist Frank Bello discussed his upcoming memoir, «Fathers, Brothers, And Sons: Surviving Anguish, Abandonment, And Anthrax», which is due on October 12 via Rare Bird. The foreword was written by KISS bassist/vocalist Gene Simmons.

«My co-writer, Joel McIver, you’ve probably heard of him,» he said (as transcribed by BLABBERMOUTH.NET). «He’s done, I think, 32 books at this point. He’s an incredible writer. I’ve been a friend of his for a long time. We’ve been talking this for years — about doing this. And it just wasn’t the right time. It just happened when all this COVID started, Joel hit me up and he said, ‘This might be the right time.’ And I started thinking about it, and I said, ‘You might be right.’ While there was downtime and I could get my thoughts together and make it work where Joel can… What he’s great at doing is triggering a memory — he’ll just light the match, and all of a sudden, there’s a big flame. And he gets these stories out of me that maybe are in my head that I didn’t have — I didn’t remember a lot of them. And it would just carry on from there. He just kind of lit the fire, and then all these stories kept pouring out of me. It’s a great way to work because all you kind of need is that little piece of a story, and then the pieces start to come together. And it’s a lot of fun to do — relive this stuff — because it all came back. And once I was in that zone, they started flowing, and there was a lot of great, fun stuff. And to relive it, it made me really reflect — in this reflection time, I think we all are; [because of] this COVID thing that’s going on — how fortunate I’ve been to be in the band and the success the band’s had and all that stuff. And it’s fun to tell the story.»

Frank continued: «There’s been personal heartbreak in my life. You’ll read in the book. Unfortunately, my brother Anthony, at 23 years old, was murdered. And it was a really tough time in my life. I write about that. Going down to the murder scene. It was a very traumatic time in my life. Coming out of that, going back into the ANTHRAX world… It goes back and forth — there’s a lot of great rock and roll stories… I’m a sarcastic fuck, as you can probably tell, and I write like that. So I kind of tell the fun stories in a sarcastic way, and the heartfelt stories in a passionate way, because my brother was everything to me, and family is everything to me. So there’s ups and downs in the book, but this is my story of my life. I don’t think a lot of people know a lot of these stories. I’ve never shared these [with anyone], other than people in my family, some of them. And there’s even stuff in there that my family didn’t know that I’m pretty sure they’re gonna be shocked at.»

Bello, a member of ANTHRAX since 1984, has sold over ten million albums, traveled the globe more times than he cares to count, and enthralled audiences from the world’s biggest stages. His long-awaited memoir would be a gripping read even if its pages only contained stories about his life as a recording and touring musician. While those stories are indeed included — and will blow your mind — Bello also focuses on deeper subjects in «Fathers, Brothers, And Sons». Once you’ve heard his life story, you’ll understand why.

Born into a family of five, Frank grew up in difficult circumstances. His father abandoned his wife and children, and Frank‘s mother moved heaven and earth to keep them fed and educated. Left with no male role model, Frank found inspiration in heavy metal bass players, following their example and forging a career with ANTHRAX from his early teens — first as a roadie, and then as the group’s bass player.

International stardom came Frank‘s way by the mid-to-late 1980s, when he was still in his early twenties, but tragedy struck in 1996 when his brother Anthony was murdered in New York. Although the case went to trial, the suspected killer was released without charge after a witness, intimidated by violent elements, withdrew his testimony.

Two decades later, Frank is a father himself to a young son. Like many men who grew up without the guidance of a dad, he asks himself important questions about the meaning of fatherhood and how to do the job well. This is the wisdom which «Fathers, Brothers, And Sons» offers readers.

Despite the emotive nature of these topics, «Fathers, Brothers, And Sons» is a funny, entertaining read. A man with a keen sense of humor and the perspective to know how surreal his story has been, Frank doesn’t preach or seek sympathy in his book. Instead, he simply passes on the wisdom gained from a lifetime of turbulence, paying tribute to his loved ones in a way that will resonate with us all.

To pre-order a copy, go to this location. 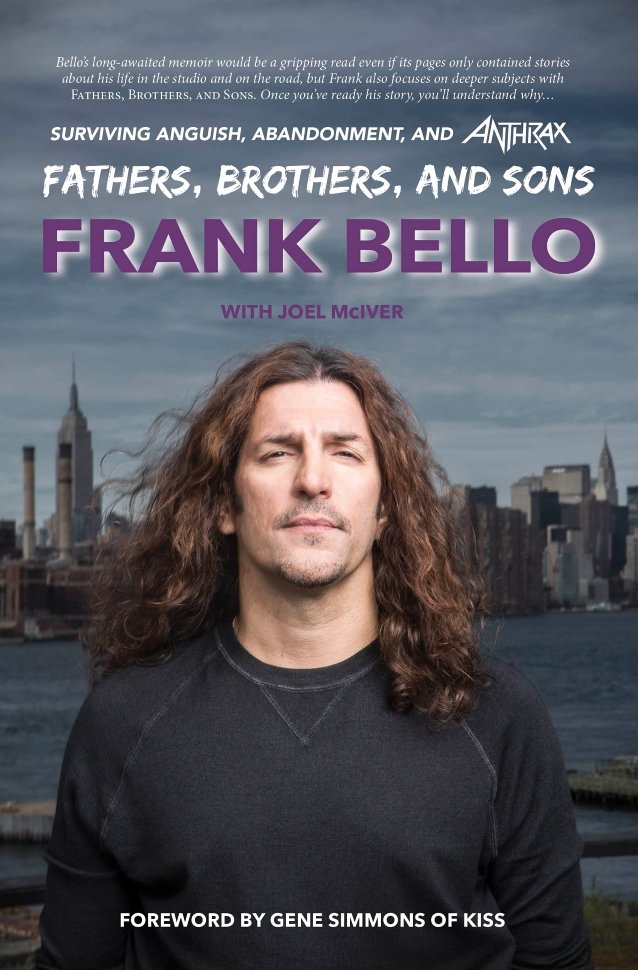