Legendary rockers FOGHAT — Roger Earl (founding member/drums), Bryan Bassett (lead guitar, formerly with WILD CHERRY and MOLLY HATCHET), Charlie Huhn (lead guitar and lead vocals, formerly with Ted Nugent, Gary Moore, VICTORY and HUMBLE PIE) and Rodney O’Quinn (bass, formerly with the PAT TRAVERS BAND) — celebrate 50 years of rock and roll with «8 Days On The Road», a 14-track live performance that will be released as a double CD/DVD package on July 16, 2021 on their own Foghat Records label, distributed by Select-O-Hits (which is part of the Sun Records family and is owned by Sam Philips‘s son and nephew).

Pre-orders are now available on these digital outlets, which includes an instant download of «Road Fever» with purchase, as well as a pre-save on Spotify. A video for the song can be seen on the band’s official YouTube page today. The collection will also be available on 180-gram vinyl in the coming months.

Recorded on November 17, 2019 at Daryl’s House Club in Pawling, New York, the collection features the band’s biggest and most legendary hits, including «Slow Ride», «I Just Want To Make Love To You», «Fool For The City» and so many others.

As original drummer Roger Earl explains: «Eight days on the road is more like 80,000 days on the road for us, but that’s okay; I love my job! It was a change and a real pleasure to play this particular small room. I explained to a couple of folks sitting down front as we were about to take the stage that we sweat a lot, and they might want to finish eating. They just grinned and said, ‘We’re ready.’ And so were we!»

«To play in a small intimate venue like Daryl’s club was really fun and something we don’t do often,» says lead guitarist Bryan Bassett. «Combine that with the fact that this venue has been fine-tuned for acoustics by the on-site recording professionals and this became a great place for us to play and record.»

While bassist Rodney O’Quinn shares: «In 2019, we were definitely living up to the title, ‘8 Days On The Road’. Having played at Daryl’s House once before, I remember that it was such a great-sounding room. The energy in the room that night was electric, and the band was hitting on all cylinders.»

Singer/guitarist Charlie Huhn concludes: «Playing in an intimate club is so much more energetic and exciting, because as a performer, when you are close to the audience, it’s as though you are really in there with them and they are onstage with you. This closeness feeds on you to bring out the best which is a very cool feeling. After playing in larger, more distant stage scenarios like fairs, festivals, casinos and theaters, it was really awesome to be right in with the audience. The close proximity lends an especially exuberant feel that is infectious, and this show was no exception.»

Formed in 1971 when «Lonesome» Dave Peverett and Roger Earl left the British blues-rock band SAVOY BROWN, FOGHAT has earned eight gold albums, one platinum album and one double-platinum album. They’ve continued to release new music every few years and have never stopped touring and recording, although there have been several ups and downs and lineup changes over the years. They sadly lost Peverett in 2000, Rod Price in 2005 and Craig Macgregor in 2018, but founding drummer Roger Earl kept the band’s musical legacy going.

If FOGHAT had only given us «Slow Ride», the band’s place in rock history would be secure, but the band is so much more than that. As stated by Roger Earl: «We are still a ‘work in progress,’ writing and recording and plan to be until the day we depart this earth.»

The band has already started to work on a new blues/rock studio album, to be released in 2022.

«8 Days On The Road» track listing: 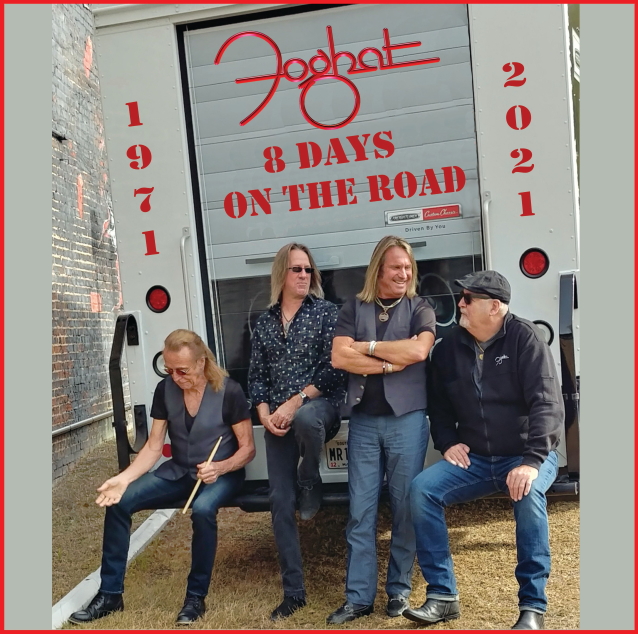