DEATHRIDERS, the band featuring featuring Neil Turbin (ANTHRAX) on vocals, Jonas Hornqvist of guitar, Richard Svard on bass, and Matt Thompson (KING DIAMOND) on drums, has released its debut single and video produced by KING DIAMOND guitarist Andy La Rocque at Sonic Train Studios in Varberg, Sweden. «Never Surrender» is taken from the DEATHRIDERS‘ upcoming debut album, «The Metal Beast». The video was edited by Jimmy Kay of The Metal Voice and was shot on location at the Alamo in San Antonio, Texas and Sonic Train Studios.

Turbin stated: «The new song ‘Never Surrender’ combines power, melody, neoclassical and thrash in a way that I didn’t have the opportunity to sing like I did on [ANTHRAX‘s] ‘Fistful Of Metal’ and ‘Armed And Dangerous’.

«I can’t wait for everyone to hear our new album. The album is so diverse — there are many tracks leaning on the thrash side but there are also many tracks which are melodic and technical as well.

«DEATHRIDERS packs a punch with a brilliant team of high-precision players.»

You can purchase «Never Surrender» on Bandcamp.

ANTHRAX has had a number of vocalists — including Turbin, Joey Belladonna, Dan Nelson and John Bush — over the last 40 years, with guitarist Scott Ian and drummer Charlie Benante remaining the sole bandmembers who have appeared on every one of the group’s studio albums.

Turbin performed and recorded with ANTHRAX on the original demo recordings and the band’s debut album, «Fistful Of Metal». He wrote the lyrics to all songs on that LP with exception of the cover of Alice Cooper‘s «I’m Eighteen», and also has writing credits on five of the seven songs on the band’s «Armed And Dangerous» EP, as well as two songs on «Spreading The Disease». 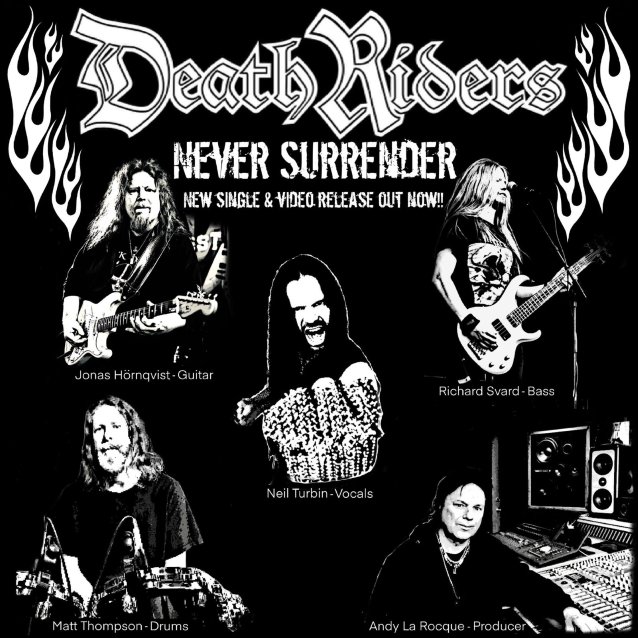