HATEBREED Replaces IN FLAMES On 'The Metal Tour Of The Year' | SoundPark music community!

HATEBREED Replaces IN FLAMES On ‘The Metal Tour Of The Year’

Due to international visa issues, Swedish metallers IN FLAMES have pulled out of «The Metal Tour Of The Year», co-headlined by MEGADETH and LAMB OF GOD and featuring special guests TRIVIUM. Replacing them on the bill will be HATEBREED.

Earlier today (Tuesday, July 13), IN FLAMES released the following statement: «In light of the ongoing COVID-19 pandemic, we had to make the difficult decision to not join ‘The Metal Tour Of The Year’. We were looking forward to playing for you all and this was an unbelievably hard choice to make.

«Thank you for understanding and your support as we all get through this unprecedented time. We have a lot of things in the works for 2022 — more on that shortly. Stay safe & we’ll see you on the road again soon!»

Produced by Live Nation, the rescheduled «The Metal Tour Of The Year» will now kick off on Friday, August 20 in Austin, Texas and hit a further 26 cities before wrapping in Quebec City, Quebec, Canada on Saturday, October 2.

IN FLAMES recruited American drummer Tanner Wayne, best known for his work with UNDERMINDED, SCARY KIDS SCARING KIDS and CHIODOS, to sit behind the kit for the band for its 2018, 2019 and 2020 live appearances.

Wayne stepped into IN FLAMES following the departure of Joe Rickard, who played on «I, The Mask» and «Battles».

Tanner made his live debut with IN FLAMES in July 2018 in Brno, Czech Republic.

Longtime IN FLAMES drummer Daniel Svensson announced in 2015 that he was leaving the band to focus on his family life.

IN FLAMES‘ current lineup features American bassist Bryce Paul, who has been playing most of the shows with the group since longtime bassist Peter Iwers‘s November 2016 exit.

IN FLAMES guitarist Niclas Engelin has been sitting out the band’s tour dates to focus on «personal matters.» Filling in for him is former MEGADETH and current ACT OF DEFIANCE guitarist Chris Broderick.

HATEBREED‘s latest album, «Weight Of The False Self», was released last November via Nuclear Blast Records. The LP was produced by frequent HATEBREED collaborator Chris «Zeuss» Harris and it arrived on the heels of the sold-out anniversary shows that HATEBREED embarked upon throughout 2019 and the unprecedented success of 2016’s «The Concrete Confessional». Not only did the latter tally over 42 million Spotify streams, but the single «Looking Down The Barrel of Today» also clocked 30 million-plus Spotify streams. The band also covered Revolver and The Guardian bestowed a 4-out-of-5-star rating on the album, proving that over 20 years deep into its career, this Connecticut hardcore metal institution remains as vital as ever. 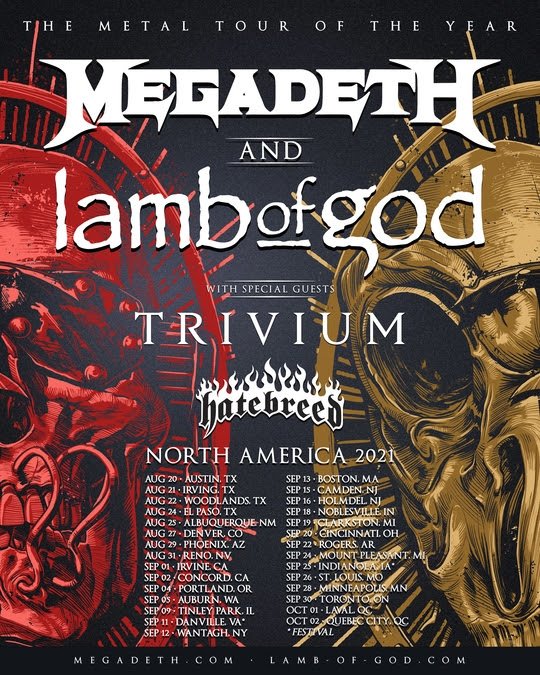