The year was 1998 when hard rock icons GREAT WHITE released «Great Zeppelin: A Tribute To Led Zeppelin», an electrifying live album that found GREAT WHITE frontman Jack Russell stepping into the vocal shoes of ZEPPELIN singer Robert Plant for a phenomenal full-length celebration of that British band’s long lasting influence on Russell and company. The album quickly became a fan favorite and proved beyond the shadow of a doubt that Russell possessed one of the most powerful voices in rock music.

Since that time, over 20 years later, fans have been clamoring for a follow-up and now JACK RUSSELL’S GREAT WHITE is ready to deliver. «Great Zeppelin II: A Tribute To Led Zeppelin» is the long-awaited sequel that rocks even harder than its predecessor and includes all-new covers of «Kashmir», «Houses Of The Holy», «Misty Mountain Hop» and more. Russell, of course, remains in top form and he’s ably backed by stellar guitarists Robby Lachner and Michael Olivieri along with bassist Dan McNay and drummer Dicki Fliszar. The full album gets officially released on August 13 but the band is proud to share the first single, a killer take on the song that was recently honored as having «the greatest guitar riff of all time» by Guitar World magazine, «Whole Lotta Love».

Speaking about the project as a whole, Russell proclaims: «I’m really excited about ‘Great Zep II’. We had such a great time recording it and took the opportunity to choose songs we hadn’t covered on the first one. The band played beautifully and the sound, I believe, is first class. I’m hopeful everyone will enjoy listening to it as much as we did playing it.»

«Great Zeppelin II: A Tribute To Led Zeppelin» will be available on both CD in a deluxe digipak and on colored vinyl in a gorgeous gatefold jacket.

Released in 1998, «Great Zeppelin: A Tribute To Led Zeppelin» was a covers album dedicated to songs of LED ZEPPELIN. It was recorded live in December 1996 at the Galaxy theatre of Santa Ana, California and was made available through the French label Axe Killer.

Last year, Jack told Rockin’ Metal Revival about his new collection of ZEPPELIN covers: «It’s great, because it’s different songs, and some of them are heavy ones and more keyboard-laden… ‘Houses Of The Holy’, ‘Trampled Under Foot’ — songs like that. ‘Kashmir’ — that came out brilliant, [it] came out amazing. So I’m really proud of that and I wanna get that out as soon as possible… It’s a beautiful record. It came out really good — beyond my expectations.»

Jack also reflected on GREAT WHITE‘s decision to perform a stripped-down version of ZEPPELIN‘s «Babe I’m Gonna Leave You» during a 1990 appearance on «MTV Unplugged». Asked if he knew he and his bandmates were going to get the response they got from that performance, Russell said: «No, I did not. You know what was really weird? When they put it in regular rotation on MTV, and the weirdest thing was when they did a LED ZEPPELIN special and they put our version in the LED ZEPPELIN special. And I was blown away. I’m, like, ‘There’s no way they just did that.’ I had goosebumps for days, thinking, ‘This is incredible.’ Robert Plant, I saw him a couple of different times commenting, ‘Oh, that Jack Russell guy, he sounds more like me than I do.’ Another one he said was, ‘He sounds more like me on a good night.’ And I heard this from people that I really respect and know and wouldn’t make that stuff up. So it was great.»

Russell was fired from GREAT WHITE in December 2011 (after being on hiatus from the group since 2009). He sued his onetime bandmates the following year over their continued use of the GREAT WHITE name after Jack had taken a leave of absence from the band for medical reasons. A short time later, Russell was countersued by Mark Kendall, Michael Lardie and Audie Desbrow, claiming the vocalist’s self-destructive behavior was damaging the GREAT WHITE name (they also alleged he was charging promoters less for his own touring version of GREAT WHITE). The parties settled in July 2013 without going to trial, with Russell now performing as JACK RUSSELL’S GREAT WHITE while the others are continuing as GREAT WHITE.

JACK RUSSELL’S GREAT WHITE‘s debut album, «He Saw it Comin'», was released in January 2017 and featured the singles «Blame It On The Night», «Sign Of The Times» and «Love Don’t Live Here».

Last year, JACK RUSSELL’S GREAT WHITE released «Once Bitten Acoustic Bytes», a very special acoustic album revisiting GREAT WHITE‘s 1987 multi-platinum masterpiece «Once Bitten» featuring some of the band’s biggest and most recognizable hits, including «Save Your Love» and «Rock Me». 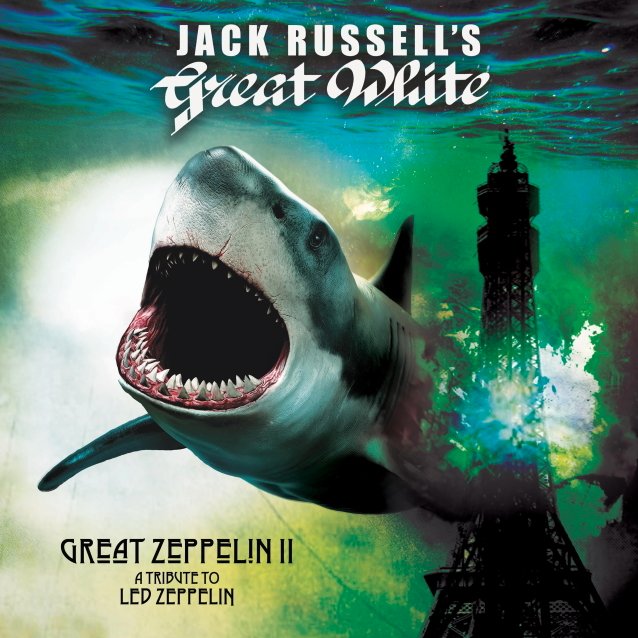