One of heavy metal’s greatest bands JUDAS PRIEST is set to release a mammoth limited-edition box set which will include every official live and studio album to date plus 13 unreleased discs. This is the most extensive release of previously unreleased music the band has made from its vast archives — a real treat for fans. Restored and mixed by Tom Allom at La Cucina W8 and mastered by Alex Wharton at Abbey Road Studios, this special release will be out on October 15 via Sony Music.

This special box set comes as JUDAS PRIEST finally gets the opportunity to celebrate its 50th anniversary with a headline slot at Bloodstock Open Air festival in the U.K. plus the launch of a U.S. tour this fall. The «50 Heavy Metal Years» tour is fueled by the highest-charting album of PRIEST‘s career, «Firepower», which peaked at No. 5 on the Billboard 200 and No. 5 in the U.K.

JUDAS PRIEST originally formed in 1970 in Birmingham, England (an area that many feel birthed heavy metal). The original nucleus of musicians would go on to change the face of heavy metal. Throughout the 1970s, PRIEST was responsible for helping trail blaze metal with such classic offerings as «Sad Wings Of Destiny» (1976), «Sin After Sin» (1977) and «Hell Bent For Leather» (1978) as well as one of the genre’s top live recordings, «Unleashed In The East» (1979), among others.

It was during the 1980s that PRIEST conquered the world, becoming a global arena headliner on the strength of such all-time classics as «British Steel» (1980) and «Screaming For Vengeance» (1982) as well as being one of the first metal bands to be embraced by the then-burgeoning MTV plus performing at some of the decades biggest concerts (1980’s Monsters Of Rock, 1983’s US Festival and 1985’s Live Aid) and being the first to exclusively wear leather and studs — a look that began during this era and would eventually be embraced by metal heads throughout the world. PRIEST‘s success continued throughout the 1990s and beyond with the addition of drummer Scott Travis, as evidenced by such additional stellar offerings as «Painkiller» (1990), «Angel Of Retribution» (2005) and «A Touch Of Evil: Live» (2009), the latter of which saw PRIEST win a Grammy Award for a killer rendition of the classic «Dissident Aggressor».

In 2011, new guitarist Richie Faulkner came in to replace K.K. Downing, who had left in 2010. The move seemed to have reinvigorated the band as evidenced by a show-stealing performance on the «American Idol» finale that also served as Faulkner‘s debut performance with the band (also in 2011 was the release of a new compilation «The Chosen Few» which included PRIEST classics selected by some of metal’s biggest names) and the «Epitaph» concert DVD in 2013.

PRIEST‘s next studio effort would arrive in 2014 — «Redeemer Of Souls» — which was supported by another strong tour. In 2017 (and again in 2019), JUDAS PRIEST received a nomination for the Rock And Roll Hall Of Fame and got ready to unleash its latest studio album, «Firepower» (produced by Andy Sneap and Tom Allom) which received global success and critical acclaim. In 2020, a fully official and authorized photographic book, «Judas Priest: 50 Heavy Metal Years», was issued.

A «Reflections» edition of the box set will also be available to purchase in CD and 2LP formats.

Added guitarist Glenn Tipton: «If there’s one box set you should have in your heavy metal collection, it should be this one. It’s immortal. Proclaiming and truly representing metal for over 50 years, flying the flag and proudly leading the way inspiring many bands throughout the years, this 42-CD selection says it all. It’s a big part of metal history and as such will live forever.» 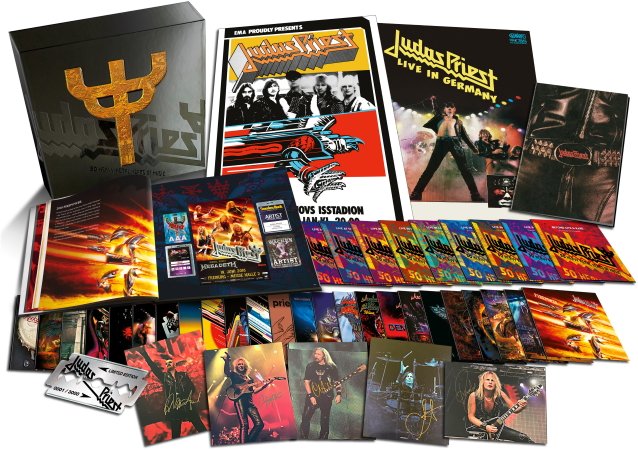