On September 25, 2021, METAL ALLEGIANCE will reassemble and hit the stage for the first time in nearly two years on Long Island, New York — where METAL ALLEGIANCE began back in 2014 — at Stereo Garden in Patchogue, New York (their first show since before COVID-19). The night will feature music from METAL ALLEGIANCE‘s self-titled album, «Fallen Heroes» EP and «Volume II — Power Drunk Majesty», as well as a special set of covers picked just for this show.

Bush comments: «Always a blast to get on the stage with my METAL ALLEGIANCE homies. Never played on the Island with ’em! This is a first for me… I’m looking forward to getting on any stage at this point. We’ll be tearing through some METAL ALLEGIANCE originals, classic metal songs along with some ANTHRAX tunes from the records I made with them… It is ANTHRAX‘s 40th anniversary after all… Come on out, metalheads!»

Menghi states: «METAL ALLEGIANCE is back! Can’t wait to hit the stage again and shed some of these COVID pounds! Haha. It’s been way too long since we hit it and this show is a special one as it’s on METAL ALLEGIANCE‘s home turf of Long Island.

«New York audiences have some catching up to do with our West Coast friends. Let’s show them how it’s done!»

Portnoy says: «After an unexpected year and half vacation, I am sooooooo excited to finally be playing live again! And what better way to break my post-COVID cherry than with my metal brothers in METAL ALLEGIANCE! And what better place than my old home sweet home, Strong Island… I can’t wait!»

States Skolnick: «We are all looking forward to hitting the stage once again as METAL ALLEGIANCE, this time in Long Island, our symbolic hometown, sight of many meetings (and tacos) and location of our first recording. After the year or so we’ve all had, this first (and only) METAL ALLEGIANCE gig of 2021 will have an extra special energy. Don’t miss it!»

In addition to this being the bands only concert of 2021, they will be filming for a future online streaming event and release. Radio personality Rob Rush (94.3 The Shark) will be the guest MC. Presented by Metal Department and Loaded Concerts, the night will include performances by KILLCODE, MAGUS BEAST and TO THE PAIN, with doors opening at 7 p.m.

The Soundcheck VIP meet-and-greet option will give show-goers everything listed above plus an exclusive «Soundcheck» viewing with METAL ALLEGIANCE crew from the front of the stage and/or on the stage!

Please note that VIP packages do not include a ticket to the concert and must be purchased separately.

METAL ALLEGIANCE will be following any and all COVID-19 protocols during VIP meet-and-greet and the concert. 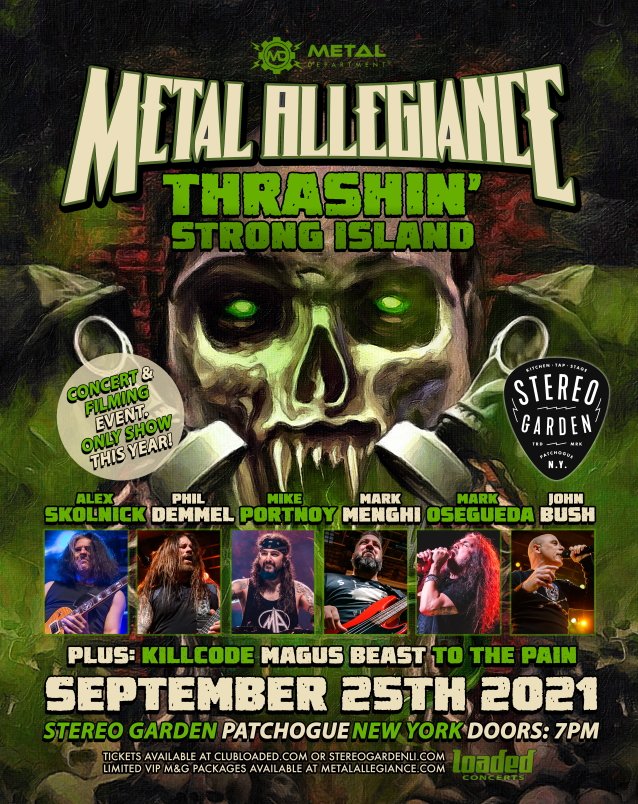