D.D. VERNI & THE CADILLAC BAND has released «Cadillac Man», the first single and video from their debut album, «Let’s Rattle», out September 17 (via MVD). Expect high-energy original swingin’ and rockin’ big-band music from D.D. Verni, the songwriter/founding member/bassist for heavy metal pioneers OVERKILL who’ve sold millions of records worldwide and have released 19 studio albums dating back to their 1985 debut album. Watch the video, filmed at the Vogel Theater in New Jersey and directed by Rich Furniss, produced by Adam Torkel and edited by Steven Bartashev, below.

Verni has always dreamed of recording a big band album, as his love for the sound dates back many years. The New Jersey-based artist began by writing a fantastic collection of soon-to-be big band classics. Next, he recruited longtime BRIAN SETZER ORCHESTRA upright bassist John «Spazz» Hatton to do horn arrangements and play upright bass, while D.D. switched things up playing some guitar on the album. Then D.D. brought in the L.A.-based horn section from PHAT CAT SWINGER to play the horns and added BRIAN SETZER ORCHESTRA drummer and current DOOBIE BROTHERS member Tony Pia. Add jazz pianist Dave Moscoe and HOT ROD guitarist Damian Bacci, and you have a star-studded lineup of big band greatness that made this album shake and swing.

With songs like «Cadillac Man», «Shake It Swing It» and «Olivia…That’s Who!», the album features 13 tracks (nine originals and four covers), was produced by Verni and mixed by Greg Reely (COLDPLAY, SARAH MCLACHLAN, OVERKILL), and recorded in Los Angeles and New Jersey.

An interview with D.D. Verni follows below.

Question: A lot of people are going to be really surprised that you’ve recorded an album fully embracing a big band sound with rockabilly and other early rock and pop stylings, particularly since you’re known as songwriter/founding member and bassist for OVERKILL. What inspired you to take this musical direction, sing lead vocals, and play guitar?

Verni: «Yeah, I think it will be a bit of a shock to some people, but I have been a fan of this kind of music for a long time. The old big band standards were playing at my house when I was a kid. My dad was a big Sinatra fan, so I’m sure some of it’s from growing up with that and AM radio. And I always loved ’50s music and doo wop — Fats Domino, Jerry Lee, etc. And loved the crooners too — Bobby Darin, Dean Martin, Tom Jones — and even in metal and rock: Jim Morrison, Ian Astbury, Glenn Danzig…all of the crooning type of vocalists I’ve always loved. And then I don’t know how long ago it was now, but when Brian Setzer put his big, band orchestra together the first time I thought, ‘This is amazing.’ I never really understood why no one else was trying their hand at that. I mean there’s a thousand blues bands all in the same genre and doing their own thing with it, but almost no swing/jump blues/rock and roll type of bands. I had collected a lot of riffs and material through the years — I just put it aside thinking one day I’ll get to this and so with that in mind I just started writing the types of songs I liked best. High-energy, tap-your-toes, get-up-outta-your-seat kind of songs. I’m not one for jazz really or even a country twang as some bands in the genre touch on, so I kept it moving and jumping even on the standards we recorded, because that’s really what I love best. I am a songwriter at heart; I have done all these records with OVERKILL, and also some side projects and was involved in writing a musical for a few years, so changing my head space is not such a big deal to me. I like what I like and as long as the energy is good, I can roll with it. Even with OVERKILL, I’m not trying to be ultra-heavy, or ultra-punk…the only real line I follow is, ‘Am I digging it?’ and if the answer is ‘yes,’ then I jump in. And I think the singing and playing guitar throws people a bit as well as I’m known as a bassist. But that’s part of the fun to stepping out and trying new stuff. I had been the vocalist on my solo album and was not such a stretch doing this. Although I learned a lot and have to say singing is not as easy as I once thought… hahaha. And I am not really an upright bass player, which I knew I wanted for this, so it just made sense to stay with the guitar.»

Q: As a songwriter having written nine of the 13 songs, this musical sound required a different mindset. How did you get yourself psyched up for it? It’s a different language of course than metal.

Verni: «Ya know it is and it isn’t. Metal is about energy. Although a lot of the times it’s angry energy. [Laughs] But that’s why it is so great —to scream and yell and get it out. This music is about energy as well but really about joy and fun. All the lyrics are fun and upbeat. Some little stories — nothing politically motivated or ripped from the headlines. Just fun. Even when writing and shooting the video, you can see people are smiling and bouncing around. So that’s a cool headspace to be in when writing. That’s actually cool to be around anytime! Part of what I love about this record is that it’s fun! Especially after the last year that everyone has had, it would be easy to do an angry-as-hell record, but for me this is refreshing, like comfort food. [Laughs]»

Q: Of the album’s 13 songs, which ones are personal highlights for you and why?

Verni: «Some of these songs have a long history, like the song ‘Manhattan Baby’, which is a kinda Louis Prima type of thing. I wrote and recorded that song 26 years ago when my first daughter was born — for her and my wife as a present. Then on my wife’s 50th birthday, I wrote and recorded ‘Just Say You Love Me’, and gave her that as a present. And, of course, my second daughter Olivia was, like, ‘Where’s my song?’ and then on her 16th birthday I wrote and recorded ‘Olivia…That’s Who!’ So I had been toying with these kinds of songs for a very long time. Then when I started to see I had enough material to do a record, I started writing more material. And that’s where a song like ‘Cadillac Man’ came from. Definitely one of my favorites and maybe the first one I specifically wrote for the album. It kind of encompasses all the different things I wanted for the record. Upbeat, a little rock and roll and little swing. ‘Shake It Swing It’ I really love as well. Again, the energy in the song is great, really exactly what I was looking for as a foundation for the band. And ‘Close Your Eyes And Dream’ was fun because it’s a bit different. Has that old ’50s tear-jerker vibe that the RAMONES used to do too.»

Q: The performance video for «Cadillac Man» is instantly striking. Can you talk about the filming of it?

Verni: «That was a really fun day! We did it right around when COVID was loosening up a bit. It was my first time on a stage and inside a venue in over a year, and even though it wasn’t a show, it felt like it some. I think you see that in the video and from everyone that was part of it. There’s a lot of smiling and fun and energy from the song itself, but I think the fact that we all were feeling so good about performing and having the band vibe again, it was great! When we were talking about doing the video, I really felt like it had to be a band performance thing. We could have come up with a great concept kind of video, but I think people needed to see the band playing to know that it’s a real band. That this is what they can expect to see when they come to a show. It was a challenge some because of all the COVID protocols. We weren’t sure which venue we could use, and with the mask mandates and all. Plus the band that played on the record was all over the country and we couldn’t bring them all in. First person I reached out to was John because he had been such a part of the whole album; I really felt like he needed to be there and he was up for it. Then I reached out to the girls who are local and they were up for it as well. I asked my friend Angus Clark who plays in TRANS-SIBERIAN ORCHESTRA to be part of it; he was psyched and came down for the day. Then I spent a lot of time searching and calling local guys to be part of it. Funny how horn players are kind of a herd. One knows the other and then knows the other etc. Little by little, we filled in the band but you never know how the chemistry is till you start doing it. It was kind of amazing how everyone did gel. The director for the video thought we had been a band that had done a lot of touring, and I think it does come across that way. I had done a video for my solo record with a director Leigh Brooks from the U.K. and reached out to him about local directors etc. and he hooked us up with a team he had worked with from Brooklyn that he thought might be good. That was the thing; because of COVID, there was not going to be a lot of flying or bringing people in, the whole thing had to be local. But I spoke with Adam Steven and Ricky who were the team that did the video and they immediately got the vibe. Again, like the album and songs, I wanted a blend of things and some of the guys were metalheads so they understood the energy, and some were not, so they understood having it be more fun and upbeat. The whole band/album/songs etc. had been about the blend of swing and rock and roll and energy and fun. I told them that’s what I wanted to come across as the main ingredient. I like when things feel like a family atmosphere. That’s the way it’s been for me my whole life; I come from a very big Italian family. That’s the way it is with OVERKILL internally and with the fans and that’s the way I would want this to be as well. It’s just an extension of who I am.»

Verni: «I’m very excited to do some touring. We’re looking at possibilities now. Whether it be a support slot, headline shows, or even festivals, I think would be great. How about Paul Stanley and his soul band and D.D. Verni and his swing band on the same bill… [Laughs] …Awesome!!!

Q: Have your bandmates in OVERKILL heard the album and what have they said about it? 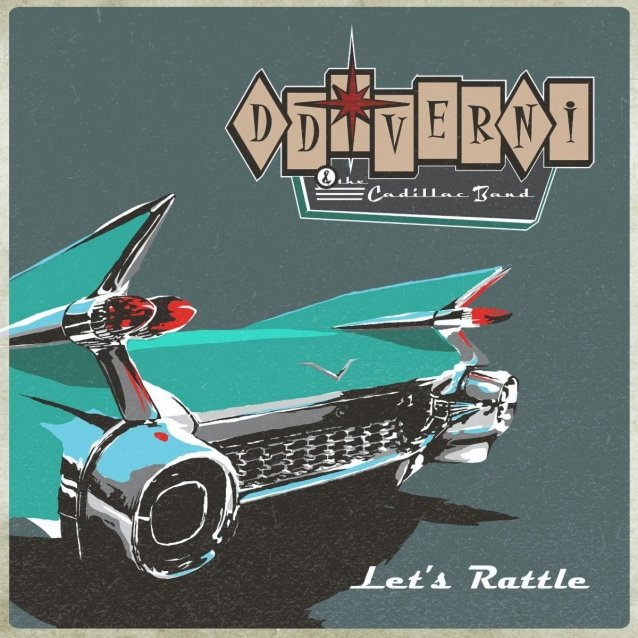