SEVENDUST and TREMONTI will join forces for a U.S. tour in September. Support on the trek will come from LYDIA CAN’T BREATHE. Tickets go on sale this Friday, June 18.

As previously reported, SEVENDUST will embark on a «socially distanced» U.S. tour later this month. The month-long trek, which will feature support from AUSTIN MEADE and KIRRA, will kick off on June 26 in Oshkosh, Wisconsin and wrap up on July 24 in Hot Springs, Arkansas. All local COVID-19 protocols will be followed, including social distancing, additional hand sanitizer stations and instructions to stay home if you’re sick.

This past April, SEVENDUST played two special back-to-back livestream events. The Atlanta-based band performed its fourth studio album, 2003’s «Seasons», in its entirety on April 10 and its 1999 sophomore effort, «Home», from front to back on April 11.

In January, SEVENDUST performed its entire «Animosity» album during a livestream event from Opav in Orlando, Florida.

Last October, SEVENDUST played its first-ever livestream and its only show of 2020: «Sevendust: Live In Your Living Room». The event took place on October 23 — the release date of SEVENDUST‘s 13th studio album, «Blood & Stone», via Rise Records. The follow-up to 2018’s «All I See Is War» was once again tracked at Studio Barbarosa in Gotha, Florida with producer Michael «Elvis» Baskette, who has previously worked with ALTER BRIDGE and SLASH, among others.

SEVENDUST singer Lajon Witherspoon told Audio Ink Radio about the recording process for «Blood & Stone»: «I feel like we’ve grown as not just artists but men, personally. I feel like we’re seasoned, if that makes sense. Maybe we’re just like an old wine. We’ve had time to really know each other. We’re brothers. It’s easy for us when we’re in the studio. It’s like a well-oiled machine, once we get back in there. That’s where the magic happens, is when we’re looking at each other. It always reminds me of when we first got together, whenever we get together, as long as we’ve been together. It’s just because there’s a certain light that comes on. It’s always been great to have that.»

Witherspoon also talked about SEVENDUST‘s longevity, saying: «You can’t just call yourself a band just because you’ve got a group of people together. I think it’s a group. I feel like you have to have a band when you’ve gone through a lot of things together, not only the good times, but the bad times. You’ve seen life together. You’ve seen death together with each other. You’ve helped each other. You’ve done all those types of things over the last 25 years, and that’s the reason why I can say I’m very proud to be in SEVENDUST the band, not SEVENDUST the group.»

He continued: «There are some bands out there — there’s a lot of bands out there — and there are a lot of groups. I think it takes heart. I think it takes compassion. I think it takes some respect. To treat each other equally, like what we’re trying to do in the world today, I feel like that’s something that’s kept us together. It’s not one guy with a Ferrari and another guy with a Hyundai, which those are nice cars, too. I’m just saying in the scheme of things. So, I think that’s something that’s kept us together, too, is that not one guy’s better or feeling better. When we get in a room sometimes, it feels like even though we’re older men, I still feel like we’re those kids that were in the recording room, wondering, how are we going to pay rent for the month? What show are we going to play? And it’s a good feeling to feel happy after all these years.» 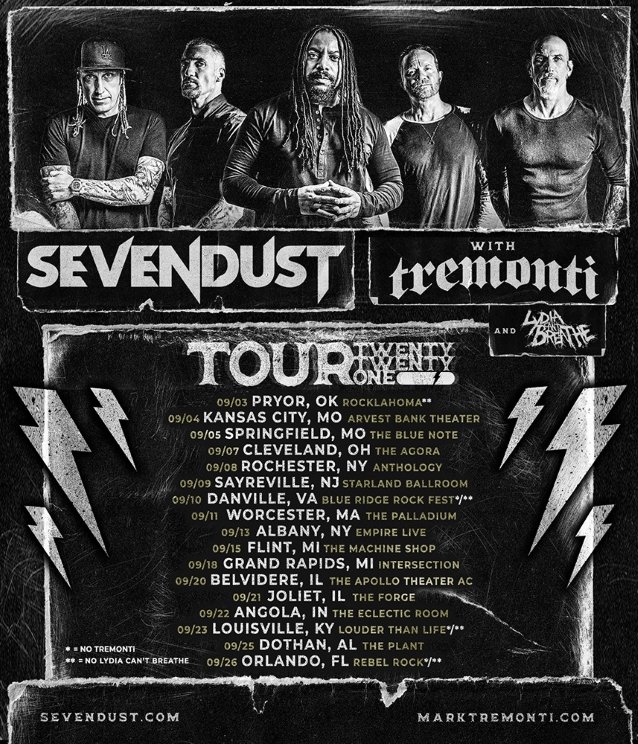