Glenn Danzig‘s homage to Italian spaghetti westerns and classic vampire films, «Death Rider In The House Of Vampires», will receive a Los Angeles theatrical premiere tonight (Wednesday, August 18) at the historic Regency Bruin Theater (948 Broxton Avenue) in Westwood at 7:30 p.m. A special question-and-answer session with Danzig and key cast will be conducted immediately following the conclusion of the film. As a bonus, each ticketed customer will receive a complimentary, limited-edition movie poster. Doors open at 6:30 p.m. Limited seating available, Get tickets at this location.

As previously reported, «Death Rider In The House Of Vampires» will open across the U.S. at select theaters on August 27.

«Death Rider In The House Of Vampires» is the follow-up to Danzig‘s «Verotika» feature film directorial debut, which received its premiere in June 2019.

«Death Rider In The House Of Vampires» was written and directed by Danzig, with Glenn also acting as the executive producer, along with James Cullen Bresack. The cinematography is by Danzig and Pedja Radenkovic. The film follows the Death Rider, who travels to the desert Vampire Sanctuary, ruled by Count Holliday. The price of admission… one untouched virgin.

According to The Wrap, «Death Rider In The House Of Vampires» stars Devon Sawa as the Death Rider, Julian Sands as Count Holliday and Kim Director as Carmilla Joe. Joining them are Eli Roth as Drac Cassidy, Ashley Wisdom as Mina Belle, Victor DiMattia as Kid Vlad, Danny Trejo as Bela Latigo, and Danzig himself as the vampire gunslinger Bad Bathory.

Glenn spoke about his new project during a question-and-answer session for the Philadelphia screening of «Verotika» in December 2019 at the Philadelphia Film Center. He said: «We just finished my vampire spaghetti western. It’s much different [from ‘Verotika’], of course, because there’s no comic book to follow. So we had pretty free rein in the movie… All the characters have like a traditional vampire name and a traditional western name… A lot of guest cameos in it — some friends of mine came in and did some cameos in the movie. It’s, again, based on the European cinema.»

He continued: «A spaghetti western is, basically… The Italians loved American westerns so much, they started doing their own westerns. And they got Clint Eastwood and Henry Fonda and a bunch of other actors — Charles Bronson — to come over and do these wild Italian westerns. And we eventually started calling them spaghetti westerns. In mine, everybody’s a vampire. So you don’t have to wait around to see the vampire — everybody’s a vampire. You don’t have to wait around to see blood — you’re gonna see lots of blood… It’s pretty crazy.»

Glenn also confirmed that he has an acting role in his new movie. «It’s such a small part,» he said. «But it was a lot of fun. I get to get all bloody, which I love being bloody — it’s part of what I do.»

Glenn previously spoke about his upcoming movie during a question-and-answer session at at the Cinepocalypse festival in Chicago. He said: «The soundtrack has been done [since 2017] and, of course, it sounds almost exactly like an Ennio Morricone soundtrack.»

When it debuted at the Cinepocalypse festival in Chicago, «Verotika» was compared by some reviewers to Tommy Wiseau‘s «The Room», the so-bad-it’s-amazing drama which is considered one of the worst movies ever made.

«If you do something you love, it’s difficult,» Danzig said at Cinepocalypse. «On a movie set, there are tons of problems that happen that you would never foresee. So, you have to hit the ground running… Right from the start, it was very clear we’re not making a Hollywood movie. A lot of my influences and the different films I like, especially European films, you can see them in here, and, lighting, colors, it’s much different from a movie you will see nowadays.» 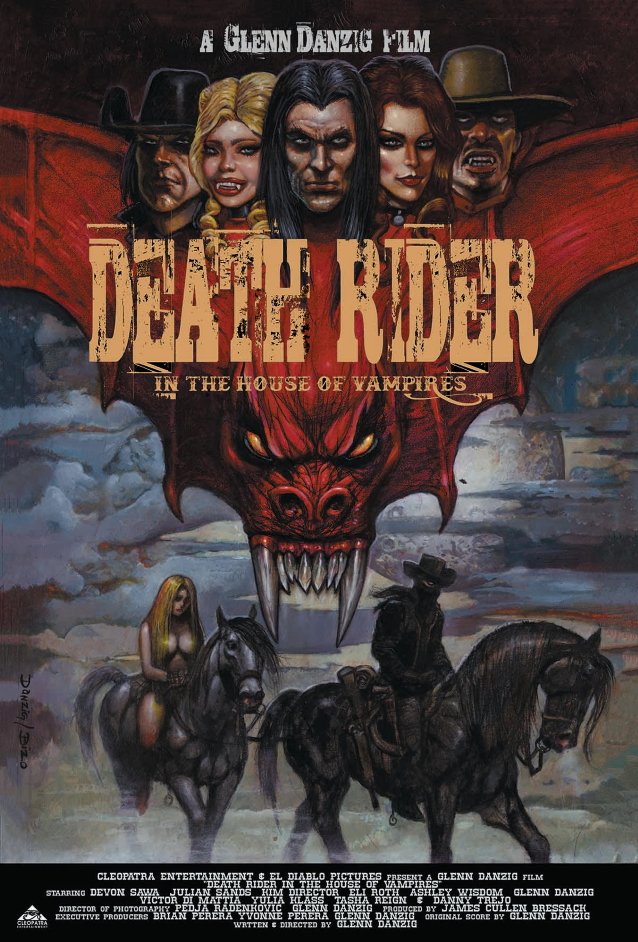