Last night (Friday, August 27), GUNS N’ ROSES played the first-ever rock concert at Las Vegas’s Allegiant Stadium, a 65,000-seat venue which is run by the Las Vegas Raiders. The show was part of the band’s U.S. tour, which kicked off on July 31 in Hershey, Pennsylvania. Support on the trek is coming from Wolfgang Van Halen‘s MAMMOTH WVH.

Prior to the Allegiant concert, the most recent GUNS N’ ROSES show in Las Vegas was the band’s appearance at the Colosseum at Caesars Palace in November 2019, a three-hour performance which closed its «Not In This Lifetime» tour.

When GUNS N’ ROSES‘ concert at Allegiant was first announced, Kurt Melien of Live Nation, which produced the gig, said in a statement: «As the largest concert promoter and headline resident promoter in Las Vegas, we had to go big for our first show at Allegiant Stadium. GUNS N’ ROSES and the Raiders go all the way back to the ’80s when the band was just starting out in L.A., so to be able to bring them to the team’s new home and to have such incredible support from the Raiders is a real honor.»

Dubbed «We’re F’N Back!», GUNS N’ ROSES‘ current tour comes on the heels of the «Not In This Lifetime» run that began in April 2016 and became the No. 3 highest-grossing tour in the history of Billboard Boxscore.

The massive touring production will wrap up with two shows in Hollywood, Florida, at the Hard Rock Live Arena on October 2 and 3, 2021.

On August 6, GUNS N’ ROSES officially released a new song called «Absurd» across all digital music providers. The studio version of «Absurd» — which is a reworked version of a previously unreleased GN’R track called «Silkworms» — arrived three days after the band performed the tune live for the first time during its concert at Boston’s Fenway Park.

GUNS launched its long-rumored and long-awaited reunion tour with an April 2016 club show in Hollywood and appearances in Las Vegas and at California’s Coachella festival.

The band is now reportedly working on a new studio album — the first under the GUNS banner since 2008’s «Chinese Democracy» and the first to feature Rose, Slash and McKagan since 1993. 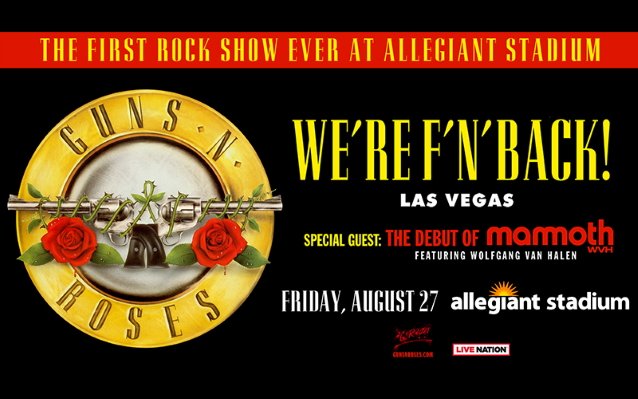