This past July, WHITESNAKE announced that it had enlisted Croatian singer/multi-instrumentalist Dino Jelusick for its upcoming tour. Jelusick is a member of multi-platinum selling band TRANS-SIBERIAN ORCHESTRA and was previously part of DIRTY SHIRLEY (with George Lynch), ANIMAL DRIVE and recorded with many others. Dino has been singing, touring and recording since the age of five. Other than being a frontman, his main instrument are keyboards but he also plays bass, guitar and drums. He finished music academy and did theater work.

Asked in a new interview with Mónica Moreira of More Than Words what his role in WHITESNAKE will be and whether he will be contributing to the band’s songwriting, Dino said (as transcribed by BLABBERMOUTH.NET): «Well, David [Coverdale, WHITESNAKE leader] mentioned that he would love to fly me [to] his house and that he would love [for] me and him to write some songs for WHITESNAKE.

Asked if he is in any way a bit sad to know that this will be probably WHITESNAKE‘s farewell tour, Dino said: «Well, no. Every band has an expire date. WHITESNAKE has been going for 40, 50 years now. More than 40 years — since ’78 or ’77, when the first album came out. But I’m proud to be the last WHITESNAKE member ever. When you see the guys that played in this band. You had Jon Lord. You had Don Airey on keyboards. You had Timothy Drury, Michele Luppi and myself. It’s five keyboardists of WHITESNAKE. There were a couple of more playing live — yeah, Paul Mirkovich was in 1994, playing that leg. Yeah, there were a couple of more. But, yeah, it’s definitely a beautiful part of history in the making.»

When Jelusick‘s addition to WHITESNAKE was first announced, David said in a statement: «I am absolutely delighted to welcome the extremely gifted Dino Jelusick to WHITESNAKE. We’ve had our eyes and ears on him since we played Zagreb together two years ago. You’re going to love him!»

Dino said he has been influenced by WHITESNAKE and Coverdale from an early age.

«I am beyond honored to be part of one of my favorite bands of all time,» he said. «To get the phone call from David Coverdale is something every singer and musician of my generation can only dream of; it still feels completely surreal. I cannot wait to start hitting the road with WHITESNAKE and, as the great DC said to me himself, to give a piece of my identity to the sound of this iconic band.»

On October 29, WHITESNAKE will release newly remastered and remixed CD and LP deluxe editions of «Restless Heart», along with unreleased demos and studio outtakes and a DVD. The DVD includes music videos and a behind-the-scenes look at the making of the album with new interviews from Coverdale. The set comes with a hardbound book filled with rare and unseen photos from the era.

Coverdale, who will turn 70 on September 22, recently confirmed that he plans to retire from touring after WHITESNAKE‘s next batch of concerts around the world.

Coverdale had both his knees replaced with titanium in 2017 after suffering from degenerative arthritis. He later explained that he was in so much pain with arthritis in his knees that it hampered his ability to perform live.

WHITESNAKE had been touring in support of its latest album, «Flesh & Blood», which was released in May 2019 via Frontiers Music Srl. 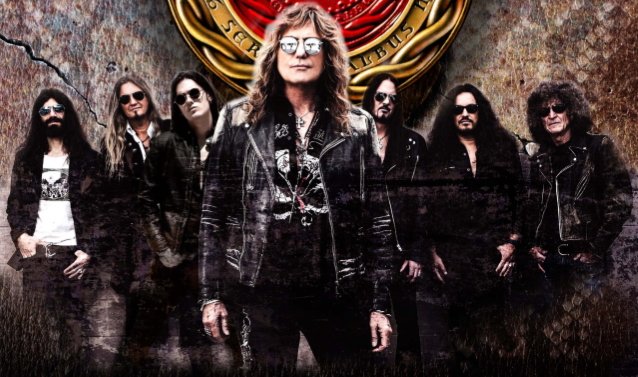