In an exclusive 16-page cover feature for issue 28 of Rock Candy magazine legendary ZZ TOP guitarist and vocalist Billy Gibbons reveals the most surprising of influences on the «Little ol’ band from Texas — DEPECHE MODE.

«One of the best things about our blues-based rock and boogie band, ZZ TOP, connecting with what was happening in the U.K. was an unexpected alliance with the leaders of the electronic music scene, DEPECHE MODE,» Gibbons explained to Rock Candy‘s Dave Ling. «That mutual appreciation was a well-guarded secret for the longest time.»

It’s hard to imagine ZZ TOP and DEPECHE MODE having anything in common, but Gibbons insists that the two bands really did bond, and that DEPECHE MODE‘s music had at least a subliminal influence on ZZ TOP’s music.

«Our fans would have thought it completely absurd that we hung out with a band so different from ourselves,» acknowledges Gibbons. «But we did. The way DEPECHE MODE used those sounds and the band’s writing style was just so infectious. It was great to see something so different become so popular around the planet.»

In an in-depth interview conducted shortly before the untimely death of longstanding ZZ TOP bassist Dusty Hill, Gibbons discusses a wide range of topics including catching COVID-19, his favorite ZZ TOP recordings, the runaway success of «Eliminator», and his current solo album, «Hardware», proving once again that he is one of the most fascinating and colorful characters in rock.

Read this and many other fascinating stories in issue 28 of Rock Candy.

Rock Candy is a 100-page, full-color bi-monthly rock magazine, created in the U.K. It covers the sights, sounds and smells from the greatest era in hard rock music, the ’70s and ’80s. Put together by respected U.K. rock journalists Derek Oliver, Howard Johnson and Malcolm Dome — all frontline writers for the legendary Kerrang! magazine in the golden era — Rock Candy is available in print format with a free digital download version for anyone who buys the mag online at www.rockcandymag.com. 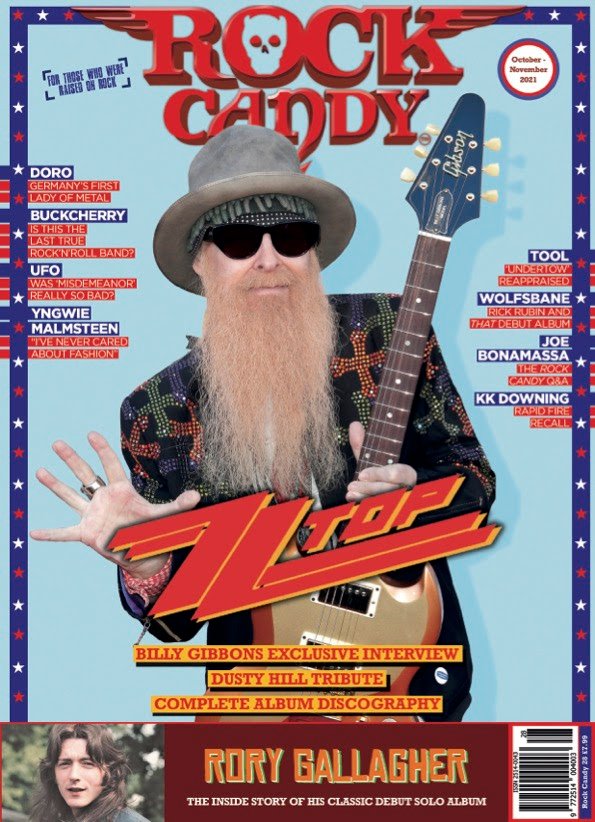