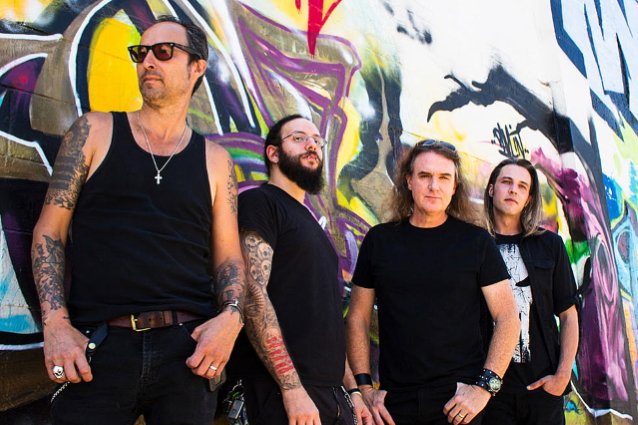 THE LUCID, the four-piece hard rock band featuring bassist David Ellefson (ex-MEGADETH), vocalist Vinnie Dombroski (SPONGE), guitarist Drew Fortier and drummer Mike Heller (RAVEN, FEAR FACTORY), has released its third single, «Hair». The song is taken from THE LUCID‘s self-titled debut album, which is due on October 15 via SpoilerHead Records. The LP’s final cover artwork, which was created by Alex Sarabia, can be seen below.

«The Lucid» was produced by Heller and mixed/mastered by Lasse Lammert.

Ellefson states: «It’s been a real blast making a record with these guys and I must say that it’s refreshing to explore some new musical avenues… to step out a bit from what each of us have done stylistically in our own careers. There was an effortless synergy that came with creating these songs together which is always amazing when working with new people. I’m looking forward to everyone checking it out!»

During a November 2020 appearance on «The Chuck Schute Podcast», Ellefson stated about how he got involved with THE LUCID: «Drew sent me a track and said, ‘Hey, can you throw a bass on here?’ And I was writing a new ELLEFSON solo record at the time, so my studio ears were on. I was plugged in and ready to go. He sent it over and I was, like, ‘Yeah, this is freaking cool, man.’ I’d seen Drew play, I know his BANG TANGO history and the other stuff he’s done. But this was really cool stuff that spoke to me. And then he called me up and he said, ‘Hey, Vinnie is gonna come in and write some vocals and lyrics and lay down some tracks.’ And it turned into a thing.»

«I love [Vinnie]. I love SPONGE,» David continued. «He’s such a rock star. He’s just a cool guy. And he writes such great lyrics — very trippy lyrics. He’s the type of lyricist I’d never worked with before, so it’s fun with that. And Drew is a great guitar player. Mike Heller — he’s good friends with [MEGADETH drummer] Dirk Verbeuren. And Dirk‘s, like, ‘Mike‘s awesome.’ They’re good friends. We all met in L.A. We got the songs together and we all met in L.A. in mid-July. I plugged in and banged out 10 songs in two days. And it was fun. Mike was very good in the studio; he really knows his way around.»

As for THE LUCID‘s musical direction, Ellefson said: «It’s cool stuff, and it’s very different. It’s, obviously, not thrash metal, hence the name LUCID. [The name] kind of feels like what the music sounds like.»

Ellefson and Fortier have also announced the pre-order for their award-winning found-footage horror film «Dwellers», which will be released October 12 on Blu-ray and digital streaming services and is available now in various limited edition pre-order bundles at www.dwellersfilm.com.

Ellefson and Fortier will promote the film at the following events:

Ellefson was dismissed from MEGADETH in late May, just days after sexually tinged messages and explicit video footage involving him were posted on Twitter. A short time later, he released a statement on Instagram denying all social media chatter that he «groomed» an underage fan. He also filed a report with the police department in Scottsdale, Arizona alleging unlawful distribution of sexually explicit images of him by unknown offenders. In the report, Ellefson admitted that he had been exchanging sexual text messages with a Dutch teenager, who captured a video of several of their virtual «masturbating encounters» without his consent and shared them with friends. (According to Ellefson, the woman was 19 at the time of their first virtual sexual encounter.) Ellefson, who lives in Scottsdale, first became aware of the video on May 9, when the claim «David Ellefson of MEGADETH is a pedophile» appeared on Instagram. Ellefson told police he was notified on May 14 by MEGADETH that the band would be parting ways with him. Three days later, he was fired.

Ellefson laid down his bass tracks on MEGADETH‘s sixteenth LP in May 2020 at a studio in Nashville, Tennessee.

In July, MEGADETH leader Dave Mustaine announced during an episode of his Gimme Radio program «The Dave Mustaine Show» that Ellefson‘s bass tracks would not be used on the new MEGADETH LP.

On May 24, Mustaine — who formed MEGADETH with Ellefson in 1983 — announced the bassist’s departure from the band.