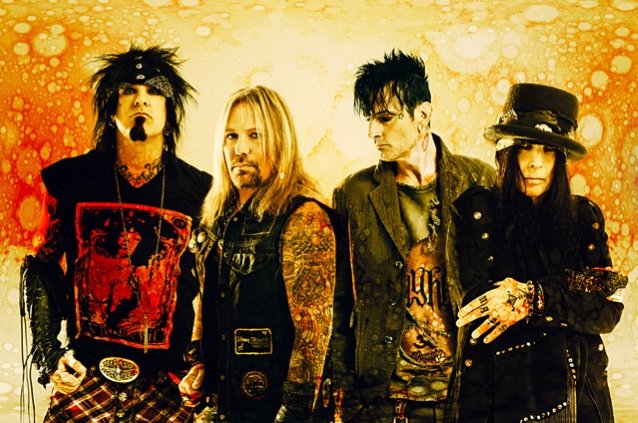 MÖTLEY CRÜE has shared «Live Wire» from the upcoming digital remaster of the band’s debut album, «Too Fast For Love».

CRÜE‘s 40th-anniversary celebrations will culminate with the digital remaster «Too Fast For Love», set to arrive exactly 40 years to the original release date of November 10, 1981. The remaster is now available for pre-order. The LP was recorded at Hit City West Studios and made available via the band’s own label Leathür Records. Eventually reaching platinum status in the U.S. and charting on the Billboard 200, the album was ranked No. 22 on Rolling Stone magazine’s «The 100 Greatest Metal Albums Of All Time.»

The «Too Fast For Love» and «Shout At The Devil» remasters join the recently released digital remasters of «Dr. Feelgood», «Girls, Girls, Girls» and «Theatre Of Pain», which kicked off CRÜE‘s 40th-anniversary celebrations earlier this year.

The recently launched Mötley Crüe 101 Spotify Playlist includes hits from the band’s entire discography. It gives new and existing fans a comprehensive guide to the band’s iconic musical legacy, taking them on a celebratory sonic journey for this special anniversary.

It was January 17, 1981 when bassist Nikki Sixx first jammed with drummer Tommy Lee and vocalist/guitarist Greg Leon. Leon left, and Mick Mars and Vince Neil were recruited. The rest, as they say, is history…

Nikki recently said about CRÜE‘s 40th anniversary: «In ‘Kickstart My Heart’, the lyrics say, ‘When we started this band / All we needed, needed was a laugh / Years gone by, I’d say we’ve kicked some ass.’

«It’s always been about great songs and over-the-top live shows for us. The fans were always right by our side. I don’t know where all of the years went. It went by in a flash. What I can’t forget are the four decades of fans who have counted themselves as Crüeheads from day one, supporting us through thick and thin. To them we are in debt and thank you from the bottom of our hearts.

2019 saw «The Dirt» released as a feature-length biopic. The film became one of the biggest releases of that year and scored a 94% positive audience score on Rotten Tomatoes.

MÖTLEY CRÜE‘s «The Stadium Tour» with DEF LEPPARD, POISON and JOAN JETT & THE BLACKHEARTS was originally scheduled to take place last summer but ended up being pushed back to 2021, and then to 2022, due to the coronavirus pandemic.