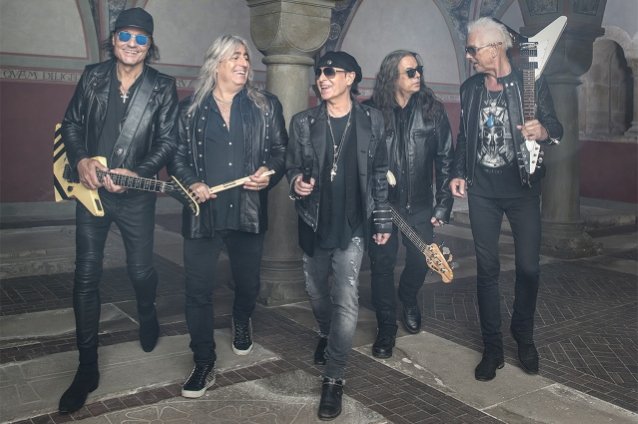 Earlier in the month, SCORPIONS released the official music video for their new single, «Peacemaker». The track, which features music courtesy of guitarist Rudolf Schenker and bassist Pawel Maciwoda and lyrics by singer Klaus Meine, is taken from the band’s 19th studio album, «Rock Believer», due on February 25, 2022.

Asked in a new interview with Chile’s Radio Futuro what fans can expect to hear on «Rock Believer», Meine said (as transcribed by BLABBERMOUTH.NET): «Well, you can expect an album that is dedicated to all the rock believers in the world. And we’re very excited after all these years. We thought, when you think about all the touring we did the last 10 years, after the release of ‘Return To Forever’ in 2015, the time was right to go back into the studio, to write new material, to write new songs and check out if the creativity is still working. The big aim was, the goal was to make a rock album — to make an album with lots of attitude, power and focus on the good old times and really enjoy the music and have some fun with the music. And that feels really good.»

Speaking about the «Rock Believer» album title, SCORPIONS guitarist Rudolf Schenker said: «Look, we are around the world since 50 years or more. And when somebody can say he’s a rock believer, then this is us. And of course, we meet our rock believers in front of us, our audience.

«So many people said rock is dead. It’s not dead,» he continued. «It’s always coming back — sometimes, okay, more stronger [or] less strong — but in the end, it’s great to play around the world in over 80 countries we’ve played so far, and all rock believers. It was always great to share the music with them together and be in connection with them. I mean, that’s so amazing and so fantastic, that we are very happy to come out with a new album. And yeah, let’s see what’s happening.»

Asked if «Peacemaker» is representative of «Rock Believer» as a whole, Klaus said: «It is an uptempo rock song, and this album really rocks. There are some heavy songs on the album, like when you think about ‘China White’ and ‘Animal Magnetism’, there’s a track on the record that is really in the best way of those songs. There are many uptempo songs and, believe it or not, there are even faster songs than ‘Peacemaker’. [Laughs] There’s also a very beautiful ballad on the album, and I’m sure there are fans out there especially love the SCORPIONS ballads, and they will enjoy this record as well very much. ‘Peacemaker’ is the appetizer for what the album is all about. It rocks.»

«Rock Believer» was recorded primarily at Peppermint Park Studios in Hannover, Germany and was mixed at the legendary Hansa Studios in Berlin, Germany with engineer Michael Ilbert, who has earned multiple Grammy nominations for his mix work with producer Max Martin on albums by Taylor Swift and Katy Perry.

«The album was written and recorded in the SCORPIONS DNA with core Schenker/Meine compositions,» said Klaus. «We recorded the album as a band live in one room, like we did in the ’80s.»

SCORPIONS‘ new album will mark their first release since 2017’s «Born To Touch Your Feelings — Best Of Rock Ballads», which was an anthology of new and classic material.

SCORPIONS originally intended to record the new album in Los Angeles with producer Greg Fidelman, whose previous credits include SLIPKNOT and METALLICA. However, because of the pandemic, some of the initial work was done with Greg remotely, after which SCORPIONS opted to helm the recordings themselves with the help of their engineer Hans-Martin Buff.

Meine previously told Talking Metal that the goal with using Fidelman to produce «Rock Believer» was to bring «the old vibe from albums like ‘Blackout’, ‘Love At First Sting’ or even ‘Lovedrive’. We try to focus on those albums and this attitude,» he said. «If we get there, who knows — it’s so many years later. But it’s the spirit and it’s the whole vibe around this album. This time, the focus is on the harder songs.»

According to Meine, SCORPIONS‘ new LP features «no outside writers at all,» unlike 2015’s «Return To Forever», which was largely co-written by the album’s producers, Mikael Nord Andersson and Martin Hansen.

SCORPIONS will kick off their «Rock Believer» world tour in March 2022 in Las Vegas where the band will play nine shows as part of their residency at Planet Hollywood Hotel. Afterwards they will cross the Atlantic to Europe where they will play six concerts in France and six shows In Germany supported by Wolfgang Van Halen‘s new band MAMMOTH WVH.

SCORPIONS‘ last full-length collection of new recordings was the aforementioned «Return To Forever», partially comprising songs the band had in the vault from the ’80s. It was the final recorded appearance of SCORPIONS‘ longtime drummer James Kottak, who was dismissed from the band in September 2016. He has since been replaced by Mikkey Dee, formerly of MOTÖRHEAD.