SABATON Teases Music Video For Next Single, ‘Soldier Of Heaven’ 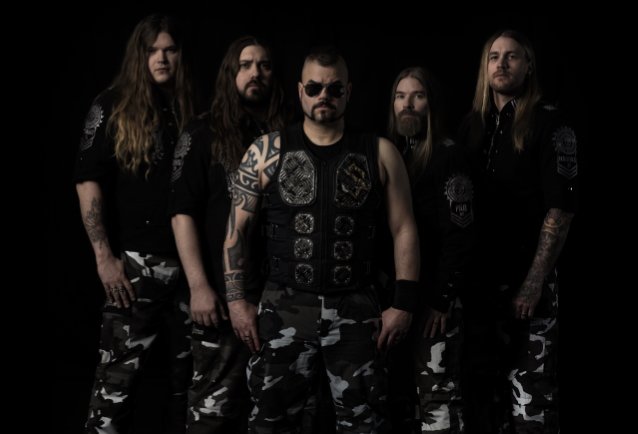 Swedish metallers SABATON have released a teaser for the official music video for their next single, «Soldier Of Heaven». The track is taken from the band’s tenth studio album, «The War To End All Wars», that will be released on March 4, 2022 via Nuclear Blast Records. Written and recorded during the COVID-19 global pandemic, the concept album of 11 brand-new songs once again dives deep into the atrocities, miracles, and events tied to the early 20th century’s World War I. The tenth album of the Falun-based five-piece will be available in an impressive variety of exclusive formats, including CD, vinyl, and cassette, with most available in limited editions.

«The War To End All Wars» track listing:

In a recent interview with Canada’s The Metal Voice, SABATON frontman Joakim Brodén said about the musical direction of the band’s new material: «It’s very much a SABATON album in that way. We’ve been an evolutionary band always and not a revolutionary band. There’s always surprises on a SABATON album but we’re never gonna flip the coin and do something totally different on every song on a new album. There’s gonna be surprises on every album. I’m actually listening to and approving the master of the new album right now.

«It’s always subjective,» he continued. «I think it’s pathetic when an artist goes, ‘It’s the best album we’ve ever made,’ and they keep promoting the same tired line. I say it’s up to the listener to decide that, but I know for a fact that everybody in the band, without even sitting in the same room together, because I sort of shipped out the pre-mixes to everyone, and everybody — this is the only time in our history this has happened — everybody came back with, ‘Fuck. That sounds great.’ Everybody is super happy with the production. We were always happy before, but it was, like, ‘Maybe this, maybe that.’ Now it was more like, ‘Okay, yeah, I have some suggestions and ideas, but wow.’ We’re really happy with the sound.»

SABATON is considered to be one the most important bands to emerge from the Swedish modern metal scene, having been honored with five Metal Hammer Golden Gods Awards (including «Best Live Band» three different years) and nominated several times for the Swedish equivalent of the Grammy Awards, the Grammis. In 2016, SABATON‘s «The Last Stand» album debuted at No. 1 in three different European countries and cracked the Top 3 in four others. Joakim Brodén (vocals), Pär Sundström (bass), Chris Rörland (guitar), Hannes Van Dahl (drums) and Tommy Johansson (guitar) curate a festival of their own, Sabaton Open Air, that started back in 2008, as well as their own forward-thinking Sabaton Cruise which has been held since 2009.