SLASH Recalls Jamming With AXL ROSE For First Time: ‘That’s When I Realized Where Music And Vocals Really Meet’ 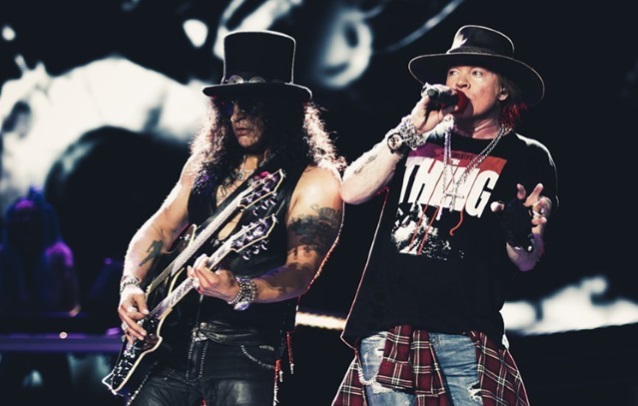 GUNS N’ ROSES guitarist Slash recently took part in a «fan first» interview with Revolver magazine in which he shared his history as a fan of music, from encounters with THE ROLLING STONES and AEROSMITH to working with A-class vocalists like Axl Rose and Myles Kennedy.

Speaking about his working relationship with Axl, Slash said (as transcribed by BLABBERMOUTH.NET): «I’d worked with different singers, on and off, for a while, and then when I met Axl and we started jamming together, he was the only singer that ever brought an emotional content to it that affected me on an emotional level, on an energy level. A song all of a sudden went to a whole new level, and I felt it. And that’s when I realized where music and vocals really meet. Because prior to that, everybody that I’d worked with sucked and I had no use for it, and I would just rather play instrumentally. But that’s when I first really arrived at that poignant feeling that you get when things connect on a lyrical and the vocal level and the music level.»

GUNS launched its long-rumored and long-awaited reunion tour with an April 2016 club show in Hollywood and appearances in Las Vegas and at California’s Coachella festival.

In a 2020 interview with Guitar Player‘s «No Guitar Is Safe» podcast, Slash spoke about what it felt like for him to step back out on stage with GUNS N’ ROSES for the first time in over two decades at the band’s concert at the Troubadour in West Hollywood, California.

«That was our first gig back,» Slash said. «I think probably the last time that we ever played there was in 1985. I don’t think we even played there in 1986. Probably ’85 was the last time we played there. «[The April 2016 concert was] our first show together after 20 years. We obviously had more gear and more crew than we did back in the day, I’ll tell you that much. And it was loud. But it was a lot of fun. It was an almost poignant moment to fucking stand there and look at that crowd in that sort of room and have that kind of nostalgic feeling.»

In 2019, Slash told Guitar.com that his first concert back with GUNS N’ ROSES was an «overwhelming» experience. «It was so cool,» he said. «Because it was a long time — we’re talking more than 20 years from the last show in 1994… it was 22 years since the last time we’d played together. And obviously I’d played with Duff [since then] but there’s a certain dynamic in the three of us together. It was awesome, and it’s a really great experience.»

Slash and his bandmates played the final show of their «We’re F’N Back» run on October 4 at the Seminole Hard Rock Hotel & Casino in Hollywood, Florida.

«We’re F’N Back!» came on the heels of the «Not In This Lifetime» run that became the No. 3 highest-grossing tour in the history of Billboard Boxscore.

As previously reported, GUNS N’ ROSES will release a new four-song EP, «Hard Skool», on February 25, 2022. The effort, which is exclusive to the GUNS N’ ROSES official store, contains the two new songs the band released in the last two months — the title track and «Absurd» (stylized as «ABSUЯD») — as well as live versions of «Don’t Cry» and «You’re Crazy».