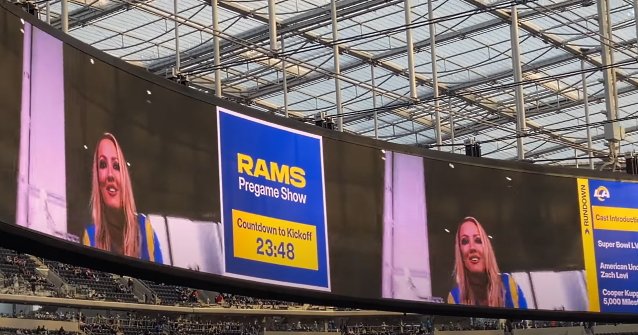 A behind-the-scenes look at Nita Strauss performing her latest single, «Dead Inside», at halftime at a Los Angeles Rams game at SoFi Stadium in Inglewood, California last month can be seen below.

In October, Nita shared «Dead Inside», her first new music since the release of her critically acclaimed debut solo album «Controlled Chaos» in 2018. The track is her first-ever solo collaboration with a vocalist, David Draiman, frontman of Grammy-nominated rock icons DISTURBED.

Strauss has been playing with Cooper since 2014 when she replaced Australian musician and former Michael Jackson player Orianthi. She joined Alice in time for a mammoth MÖTLEY CRÜE tour. She was recommended to Cooper by the legendary rocker’s former bass player and WINGER frontman Kip Winger.

Nita released «Controlled Chaos» to mass acclaim from fans and media alike, with Metal Injection calling it «a great debut that — as its creator intended — leaves no doubt», and Guitar World stating «‘Controlled Chaos’ is a panoramic view of Nita Strauss‘s many strengths». To date the album has clocked up 6.7 million streams worldwide, with music videos for singles «Our Most Desperate Hour», «Pandemonium», «Alegria» and «Mariana Trench» generating over 3 million YouTube views.

In April 2020, Nita launched «Rock Guitar Fundamentals» — a three-module online guitar teaching program suitable for learners of all levels. The course is available at www.iwanttoplayguitar.com.