JUDAS PRIEST Is 'Amped' To Be Nominated For ROCK AND ROLL HALL OF FAME Induction For Third Time | SoundPark music community! 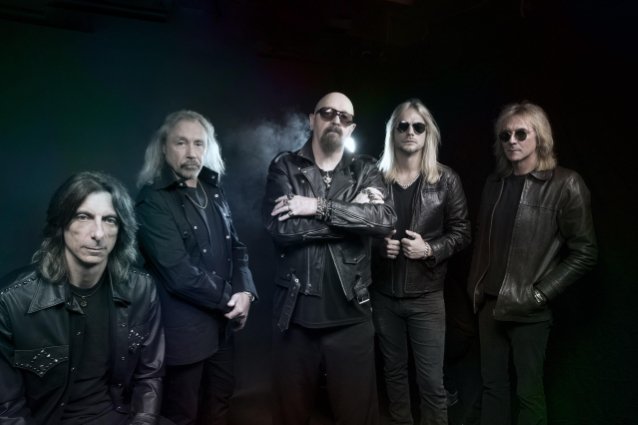 British heavy metal legends JUDAS PRIEST are «amped» to be nominated for the Rock And Roll Hall Of Fame induction for the third time.

JUDAS PRIEST was previously on the ballot for Rock Hall induction in 2020, but failed to receive enough votes to make that year’s class.

Having been eligible for induction since 1999, PRIEST was also on the ballot for the 2018 class of the Rock And Roll Hall Of Fame, but was ultimately left out of the inductee list.

Within hours of yesterday’s announcement, JUDAS PRIEST took to social media to write: «We are amped to be nominated for the 2022 RRHOF!

«You can vote every day at https://vote.rockhall.com/ until April 29th.

Earlier today, PRIEST singer Rob Halford released a video message in which he said: «Hello heavy metal maniacs. As JUDAS PRIEST continues to celebrate our ongoing 50th anniversary, we’re absolutely thrilled and stoked and amped to be nominated for the 2022 Rock And Roll Hall Of Fame. And so we know you, our beautiful heavy metal maniacs from all around the world, will dominate the daily voting that goes on from now until April the 29th and get some more heavy metal into the hallowed halls of fame. Oh, yeah!»

Once again, the Rock And Roll Hall Of Fame has named the individual bandmembers that will enter should their group get inducted.

«So, am I bothered if we ever get in? Not really. But I think we do deserve to be in there. Because I look at the list of people that are in there, and I feel that we have a place. And it would not only be for JUDAS PRIEST — it would be for British music, particularly British heavy metal music, and that’s a beautiful achievement. [BLACK] SABBATH are in there, which is great. But I’ve always said that as far as what the Rock And Roll Hall Of Fame represents, the genre of heavy metal music hasn’t really been looked after enough and respected enough.

«So, I’d like to feel that eventually we will get in.»

Even though artists are eligible for the Rock And Roll Hall Of Fame 25 years after the release of their first album or single, iconic hard rock and metal bands like PRIEST, IRON MAIDEN and MOTÖRHEAD have yet to be recognized by the institution, which inducted GUNS N’ ROSES in that group’s first year of eligibility.

Rock Hall rules state that artists become eligible a quarter century after their first records were released, but the Hall also claims that other «criteria include the influence and significance of the artists’ contributions to the development and perpetuation of rock ‘n’ roll,» which is, of course, open to interpretation.

Eligible for induction since 1999, KISS didn’t get its first nomination until 2009, and was finally inducted in 2014.

DEEP PURPLE was eligible for the Rock Hall since 1993 but didn’t get inducted until 2016.

After the 2020 Rock Hall inductees were announced in January of that year, JUDAS PRIEST guitarist Richie Faulkner said that it made no sense that DEPECHE MODE, Whitney Houston, NINE INCH NAILS and Biggie Smalls were going into the Rock Hall before PRIEST. «Hence why the Rock Hall holds no credibility for me and never has,» he tweeted.

After host Kenny Sargent brought up the original KISS lineup’s controversial 2014 Rock Hall induction which was at least partly overshadowed by the musicians’ decision not to perform, Halford said: «[PRIEST is] not the first band that this has happened to, and on the day, some things turn out the way a lot of people want ’em.

«I was thinking about this the other day,» Halford added. «And this thing came into my head: ‘Jim, the needs of the many outweigh the needs of the few, or of the one.’ Spock [in] ‘Star Trek’. When he goes in the radiation room. Isn’t that great? … That’s a t-shirt, or an inspirational card.»

Downing previously told Rockin’ Metal Revival that there is a very good chance that he would perform with his former bandmates again if PRIEST gets the nod. «Oh, I think absolutely,» he said. «I mean, why wouldn’t you, really? It’s a special thing. We’re all of an age now. These opportunities only come once in a lifetime. And it seemingly takes a lifetime to get into the Rock And Roll Hall Of Fame. I’ve always said, there’s no such thing as a young legend, right? [Laughs] So, while we’re still here, it would be great to receive that accolade and put on a great performance and put that one to bed.»

A month before the start of PRIEST‘s tour in support of its latest album, «Firepower», guitarist Glenn Tipton bowed out due to the worsening of his Parkinson’s disease, first diagnosed eight years ago (after being stricken by the degenerative condition at least half a decade earlier). His spot in the band is being filled by «Firepower» album producer Andy Sneap.