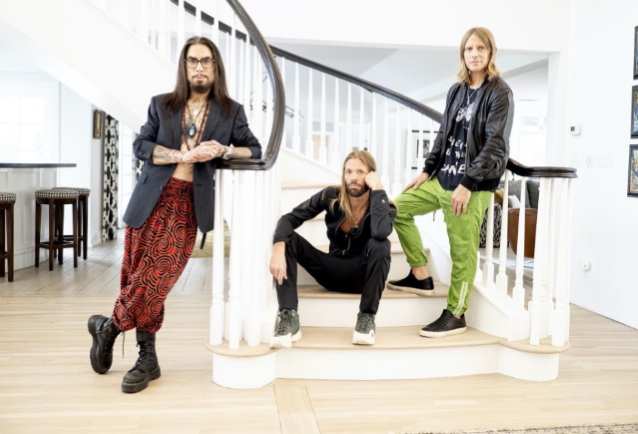 NHC, the new band featuring JANE’S ADDICTION members Dave Navarro and Chris Chaney alongside FOO FIGHTERS drummer Taylor Hawkins, has announced the release of its debut EP, «Intakes & Outtakes». In addition to two new tracks, the Los Angeles-based group is sharing two covers, LEVEL 42‘s «Something About You» and PINK FLOYD‘s «Fearless». The EP continues the sonic trajectory that the band laid down over four original songs released last year, showcasing each of these players at their absolute best, and featuring Hawkins on lead vocals/drums, Navarro on guitar and Chaney on bass.

About the EP, Navarro said: «I’m really proud of this collection of songs as they really showcase the range that we like to explore collectively.» Chaney added: «This is a great batch of songs that covers an amalgamation of our combined styles and influences.»

«If you can’t see the connection between what we do, what PINK FLOYD does and what LEVEL 42 did, well, then you’re just not getting it. We had tons of fun as usual creating these little gems.»

NHC — an acronym for Navarro, Hawkins and Chaney — is the result of pure, unharnessed creativity and the world’s biggest Mutual Appreciation Society; the guys — who all knew each other socially as staples of the Los Angeles rock world — came together over the last year and just played, giving themselves no rules or limits. For Hawkins, who had played alongside Chaney in the mid-’90s in Alanis Morissette‘s band, it was a chance to play with the one and only Dave Navarro, whom Hawkins calls «the best lead guitarist in alternative rock.» For Navarro, it was an awakening of everything he loved about playing – feeling his own playing had plateaued, NHC‘s song creation brought him back to his instrument in new and inspiring ways.

Indeed, «new and inspiring» are the best adjectives to describe these three legends when they are together in the same room. Often finishing each other’s sentences, the trio have found unfettered joy working on music together, and could not be more excited to get this project out into the world.

Last year, the supergroup debuted with tracks «Feed The Cruel» and «Better Move On», soon to be followed by «Devil That You Know» and «Lazy Eyes». These songs lead to the band’s first headlining show at the Troubadour last November, selling out instantly.

Hawkins and Chaney previously played together in Alanis Morisette‘s band in the mid-1990s and are bandmates in Hawkins‘s solo project, TAYLOR HAWKINS AND THE COATTAIL RIDERS.