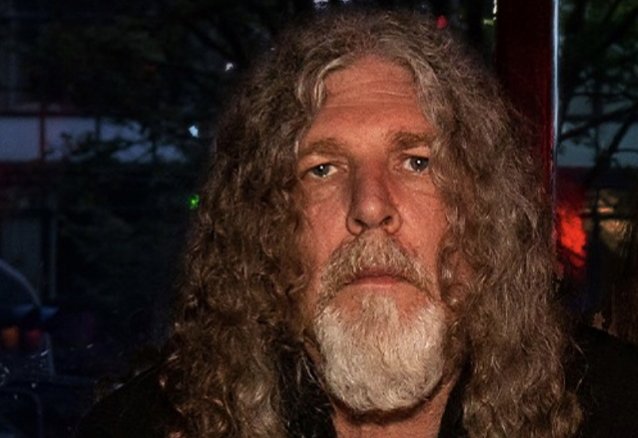 The official lyric video for «In The Lonely Light Of Mourning», the title track from former TROUBLE singer Eric Wagner‘s posthumous solo album, can be seen below. The song features a guest solo from PLACE OF SKULLS/ex-PENTAGRAM guitarist Victor Griffin.

«The title track is lyrically foreboding musically, vocally raw and emotional,» says Dave Snyder, who co-wrote the entire album with Wagner. «It’s intentionally spacious. We talked about the ‘less is more’ approach,’ leaving space to breathe. When we were putting this one together, Eric said once the chorus kicks in, ‘it’s gut-wrenching.’ I love that!

«Being a huge fan of Eric and Victor‘s work, I was ecstatic when Eric told me Victor was on board for this one. I’m not sure it gets much heavier than those two together! To be a part of that is a complete privilege and honor. I am forever grateful.»

Griffin originally met Wagner in 1985 when PENTAGRAM and TROUBLE shared the stage at the Seagull Inn in Essex, Maryland, just outside of Baltimore.

«Eric messaged me initially to see if I was interested in doing a solo on one of the songs, then we discussed it on the phone,» says Griffin. «He sent me the rough mix to check out and honestly, the first thing that struck me was the lyrics. Speaking of kinship, I really felt it with those lyrics. It kinda reminded me of a song I wrote on PLACE OF SKULLS‘ first album called ‘Dead’.»

«I’m not sure we were overdue to work together,» he continues. «Things have a way of working out the way they should most of the time. Prior to this, we got together briefly in 2009 when I invited him to sing for DEATH ROW for a one-off show at the Hammer Of Doom fest in Germany. Some of that show can be seen on YouTube. We also worked on another brief project with Ron Holzner and Henry Vasquez. I think it was Eric‘s idea to get the four of us together, so those guys came down to my place for a couple of days and we worked up some pretty cool riffs. In the end, the idea sort of dissolved for whatever reason but we did get some photos during that one session.»

The «In The Lonely Light Of Mourning» track also features former TROUBLE bassists Ron Holzner and Chuck Robinson, who played rhythm guitars. The title track is a highlight for the musicians involved in Wagner‘s solo record.

«I think it turned out great, and the song really means a lot, especially under the circumstances,» says Griffin. «It reminds me…I was working on the solo one evening and texted Eric to tell him how much I liked the song…the lyrics, his emotional vocal melody, and all the other instrumentation. He came back and said, ‘I picked that one for you for a reason.’ It seems as odd now as it did then, but we both just left it at that. I never replied back about what he meant, and he never offered an explanation…it was never brought up again. For whatever reason, I guess we both had peace with ending the conversation that way. I still think about it sometimes but feel good about how we left it. I guess I’ll know the reason when it’s time.»

«In The Lonely Light Of Mourning» will be released March 18 in North America on Cruz Del Sur Music. The album will arrive in Europe on March 4.

Recorded at Alpha Sound Services and Aardvark Recording, «In The Lonely Light Of Mourning» was completed and delivered to Cruz Del Sur Music a month before Eric‘s untimely passing. Initially scheduled for a November 2021 release, Cruz Del Sur Music — in cooperation with Eric‘s manager, Mike Smith — agreed to move the release date to March 2022 to give it the attention it deserves.

The solo endeavor — a longtime goal of Eric‘s — serves as a fitting testament to one of doom metal’s most respected voices. Eric tapped former TROUBLE/current BLACKFINGER drummer David Snyder to help him assemble the album’s eight cuts. Along the way, Eric brought in some of his favorite musicians as guests — including past and present members of TROUBLE, BLACKFINGER, THE SKULL, LID, PENTAGRAM, DEATH ROW and PLACE OF SKULLS.

Eric, who was TROUBLE‘s original singer, died in August after a battle with COVID pneumonia. He was 62 years old.

According to Holzner, Eric was generally opposed to institutionalized medicine but he wouldn’t make an exception for the COVID vaccine.

«We argued about it, and he stood his ground on the matter,» Holzner told the Chicago Reader. «I always joked, ‘The World According To Eric Wagner — you should write a book.’ He lived his life his way.»

Wagner, who smoked cigarettes and occasionally drank and vaped, had health issues, but had begun taking better care of himself and switching to a plant-based diet, Holzner said.

Less than a week before Wagner‘s death, his bandmates in THE SKULL went public with the fact that he was infected by the novel coronavirus.

Unvaccinated people, like Wagner was, are far more likely to be hospitalized or die from COVID-19 than people who are fully vaccinated.

Wagner left TROUBLE in April 2008, citing his disdain for the touring life as the main reason for his departure.

Eric was one of the guest singers on Dave Grohl‘s (NIRVANA, FOO FIGHTERS) heavy metal side project PROBOT, whose 2004 album featured heavy metal vocalists from the ’80s and ’90s.

In 2020, TROUBLE partnered with Hammerheart Records to re-release the legendary doom legends’ entire musical catalog, in addition to their upcoming album. This partnership that will see the distribution of the band’s entire library of music that spans over three decades.