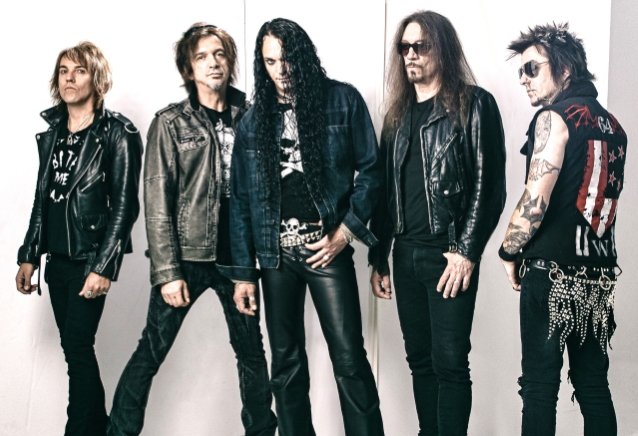 SKID ROW guitarist Dave «Snake» Sabo has confirmed to The Music Universe that fans will still have to wait several months for the arrival of his band’s new album. The group recorded the LP in Nashville, Tennessee with producer Nick Raskulinecz, who has previously worked with FOO FIGHTERS, STONE SOUR, HALESTORM, EVANESCENCE, RUSH and ALICE IN CHAINS, among many others.

Asked if SKID ROW has a release date for the new effort, Snake said (as transcribed by BLABBERMOUTH.NET): «It looks like, as it stands now, September 16th. But we’ll be coming out with new music, it looks like, around the second [or] third week of March.»

Sabo also talked about the prospect of releasing a bunch of singles as opposed to focusing on full-length albums, as was the case for much of SKID ROW‘s three-and-a-half decade career.

«Well, I think that the way that we’re doing it now we haven’t done before,» he said. «I think we’re at a stage in our careers and our lives where we’re just really open to other viewpoints. Okay, so we’re working with a new label. They obviously know what works for them better than we know what works for them. And we also know what works for us. And this whole process has been about kind of getting rid of old ways of thinking and doing things and being wide open to what exists in the current market and what exists in the current state of music. And so we wanna embrace those ideas. And not everything is gonna work for the way we work, but we’re definitely much more open [to it] in every facet — from the creation of music to the releasing of the music.

«We love the ritual of the process of opening vinyl or the process of getting into a CD,» he continued. «Rachel [Bolan, SKID ROW bassist] and I were just talking about this last night. It’s still a big part of our love of music, that process of the ritual, like I said — of having that physical product in your hand and putting it on the turntable or the CD player. And I understand that 80 percent of music is streamed these days, and that makes sense, and I embrace that as well. I mean, that’s how I listen to a lot of music; that’s how I discover a lot of music, be it on Spotify or YouTube or Amazon. And it’s great. I’m not one of those guys that condemns those platforms at all. I think it’s overcrowded and it’s not as easy to discover music, maybe, as it used to be. I still harken back to the days of underground tape trading, which was great, and underground fanzines and things like that, and that was a great way to discover music. But it’s different now, and I welcome it. I don’t lament the past — I embrace the now — and I also still know what I love as a guy who just loves music. And they can all work — they’re not exclusive of one another; it can all work together.»

SKID ROW‘s new effort will mark its first release with South African-born, British-based vocalist ZP Theart (DRAGONFORCE, TANK, I AM I), who joined the band in 2016 following the departure of Tony Harnell (TNT, STARBREAKER).

SKID ROW previously collaborated with several outside songwriters on its new material, including Corey Taylor (SLIPKNOT, STONE SOUR) and Lzzy Hale and Joe Hottinger of HALESTORM, a group that covered the title track of «Slave To The Grind» on its «ReAniMate: The CoVeRs eP» in 2011. SKID ROW also worked with songwriter-for-hire Marti Frederiksen, who has previously collaborated with AEROSMITH, DEF LEPPARD, Jonny Lang and Sheryl Crow.

As previously reported, SKID ROW has replaced QUEENSRŸCHE as the support act on the rescheduled dates for SCORPIONS‘ «Sin City Nights» Las Vegas residency. The run of shows, which was originally slated to take place in July 2020 and was later pushed back to May 2021, will now happen in March-April, 2022 at Zappos Theater at Planet Hollywood Resort & Casino.

Last August, SKID ROW celebrated the 30th anniversary of its classic second album, «Slave To The Grind», by performing it in its entirety at The Amphitheater at Rolling Hills Casino And Resort in Corning, California.