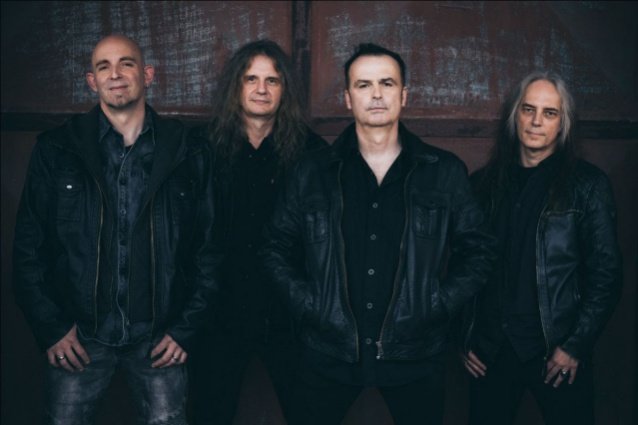 German power metallers BLIND GUARDIAN have released a new single, «Secrets Of The American Gods». The powerful, majestic new track comes with a performance video that was filmed during the recordings for the band’s new album at the Twilight Hall Studios between March 2020 and 2021. Once again, the masterfully arranged artwork for the single was created by Andrea Christen.

BLIND GUARDIAN singer Hansi Kürsch comments: «The time has come to unveil another secret: With ‘Secrets Of The American Gods’, we proudly present you the epic side of our new album that’s going to be released in September. This single edit focuses on the essence of this magnificent composition and gives you an insight into our creative work in these eventful times. The vivid construction of this song circles around its core, the monumental chorus — hopefully the ‘American Gods’ worthy. A thoroughly felicitious ear candy, in my opinion. I promise you, it’s not easy to get rid of the refrain. The tracks gets completed with the fantastic making-of-clip that Dirk Behlau created. Enjoy the moment and keep the secret: Be assured that we still haven’t played all our cards and still have some aces up our sleeves. Maybe no additional secrets but celestial surprises. Stay tuned!»

Three months ago, BLIND GUARDIAN released the official music video for another new single, «Deliver Us From Evil». Filmed by Dirk Behlau, the clip was said to be a taste of the band’s new album, set to arrive in September 2022 via Nuclear Blast.

At the time, Kürsch stated: «We know that the gap between now and the album release in late 2022 is painfully long. Neither we nor our label could defy the current worldwide economic crisis. A long story short: There is no one to blame for this situation. With ‘Deliver Us From Evil’, you will get another sweet appetizer of a very intense and vivid album that will hopefully raise your joyful anticipation until our next strike. At least, it would do it for me, but luckily I already know the whole album.

«Talking about anticipation, even though ‘Violent Shadows’ and ‘Deliver Us From Evil’ are indisputably fantastic tracks, rest assured: We won’t let you wait another ten months with only two songs. I promise you that you will always be blown away. Cheers to the digital era and its endless possibilities. Oh, and the album title. There is one but I won’t tell you yet. This would be giving away far too much right now.»

Last July, Kürsch told Rock Hard Greece about the musical direction of BLIND GUARDIAN‘s new material: «It is by far the most intense album we did in a very, very long time. It is, in every measure, a roller-coaster ride. There is a lot of let-your-hair-down stuff — more than I expected. There are some typical surprising BLIND GUARDIAN elements.

«I’m just curious to see, really, or to hear what people will think about it. I think it’s a very, very strong album. It will surprise a lot of people.

«The composing mostly has been accomplished before corona started to happen, but you can feel that there is a lot of anger in the album. It really delivers also very catchy and positive vibes, but there is a very raw energy you will feel.»

BLIND GUARDIAN‘s latest release was the all-orchestral album «Twilight Orchestra: Legacy Of The Dark Lands», which came out in November 2019 via Nuclear Blast. To create the concept, lead guitarist André Olbrich and Kürsch worked alongside German bestselling author Markus Heitz, whose latest novel, «Die Dunklen Lande», was released in March 2019. The book is set in 1629 and contains the prequel to «Legacy Of The Dark Lands».

BLIND GUARDIAN‘s last «regular» studio album, «Beyond The Red Mirror», was issued in 2015. It was the band’s first LP since 2010’s «At The Edge Of Time», marking the longest gap between two studio albums in BLIND GUARDIAN‘s career. It was also the group’s first album without bassist Oliver Holzwarth since 1995’s «Imaginations From The Other Side».