EXODUS Releases Music Video For ‘The Fires Of Division’ 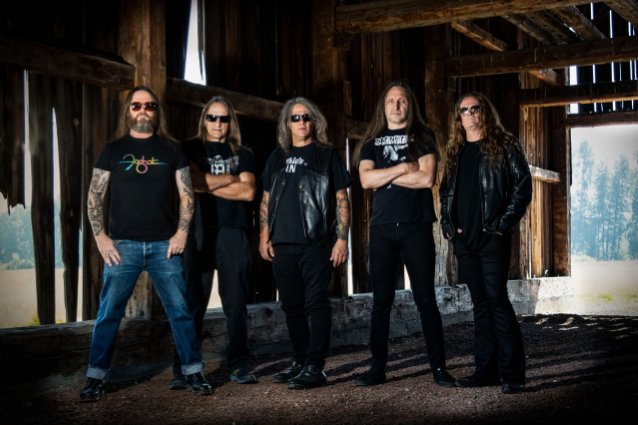 San Francisco Bay Area thrashers EXODUS have released the official music video for the song «The Fires Of Division». The clip, directed by Jim Louvau and Tony Aguilera, can be seen below. The track is taken from EXODUS‘s latest album, «Persona Non Grata», which came out in November via Nuclear Blast Records.

EXODUS guitarist Gary Holt states: «Time for our next video. This one is for ‘The Fires Of Division’ and it actually has the band in it! This video was super fun to make, as it was the first time the band had gathered together in some time!»

Last September, Holt told Canada’s The Metal Voice about the lyrical inspiration for «The Fires Of Division»: «It’s just about the sad state of affairs in the world today, the divisive nature of everything. Maybe it’s just me showing my age — I’m old enough to remember when people could have political differences and still get along. [Laughs] I guess I’m just old, right? My own band is comprised of varying different political ideologies, and we’re best friends. The world has forgotten how to do that. We’re so divided. And the powers that be want us divided. And that’s on both sides — that’s not just a hard-right or hard-left thing. They’re doing everything they can to pit everybody against each other. I think [the media and the politicians] all have a hand in it — the media, all of them; the politicians as well. Because the game they’re all playing now is they don’t think they have to earn voters to get elected; just keep the ones you’ve got and be as vile and bad as you want. And the right will portray the left as a bunch of snowflake liberals, and the left will portray the right as a bunch of inbred fucking dummies. But we’re all Americans here. And the sooner we remember that, the sooner we can start to heal. But I wrote that song while staring down the fucking Capitol riots and shit.

«I look at it like this: it’s the same thing with religion,» he continued. «Everybody pretty much knows I’m an atheist and I’m not a believer, but if I fucking wrote off all those that were, I wouldn’t have a family. Most of my family believes in Jesus fucking Christ. And I’m not gonna part ways with them because we share a different religious idealogy. And I won’t over a political either. Some of my best friends are completely different than me, and that’s okay. It’s not a bad thing. I don’t look at them as fucking lesser people because we don’t agree on something. And a lot of time, if you take the time to discuss shit like fucking humans, you’ll find that you actually can find middle ground on a lot of things.»

«Persona Non Grata» was recorded at a studio in Lake Almanor, California and was engineered by Steve Lagudi and EXODUS. It was produced by EXODUS and was mixed by Andy Sneap. For the third time in the band’s history, they returned to Swedish artist Pär Olofsson to create the album artwork.

«Persona Non Grata» is the follow-up to 2014’s «Blood In Blood Out», which was the San Francisco Bay Area thrashers’ first release since the departure of the group’s lead singer of nine years, Rob Dukes, and the return of Steve «Zetro» Souza, who previously fronted EXODUS from 1986 to 1993 and from 2002 to 2004.

In July, EXODUS drummer Tom Hunting underwent a successful total gastrectomy in his battle with squamous cell carcinoma (SCC) of the stomach. He rejoined his bandmates on stage in October at the Aftershock festival in Sacramento, California.

EXODUS tapped John Tempesta to play drums for the band at Psycho Las Vegas in Las Vegas, Nevada in August and at Full Terror Assault in Cave In Rock, Illinois in September while Hunting was recovering from surgery. Tempesta was a member of EXODUS from 1989 until 1993 and played on the band’s albums «Impact Is Imminent» (1990) and «Force Of Habit» (1992).