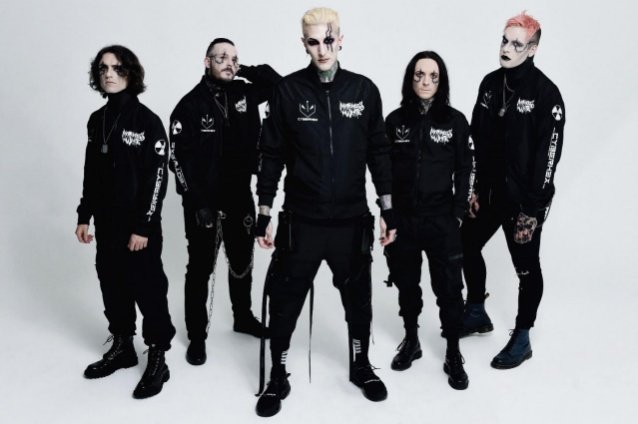 MOTIONLESS IN WHITE will release its new album, «Scoring The End Of The World», on June 10 via Roadrunner Records. The official Max Moore-directed music video for the LP’s second single, «Masterpiece», can be seen below.

In an interview with Rock 100.5 The KATT‘s Cameron Buchholtz, MOTIONLESS IN WHITE frontman Chris «Motionless» Cerulli stated about «Cyberhex»: «We were trying to decide what was the first song, and it was interesting that everybody in the band all felt the same way. Normally when you’re working with labels, they wanna put out the song that’s like the big radio song or the easier digestible track, whatever, and we just never really wanted to do that. And even though there were moments when we’ve been, unfortunately, kind of forced to do that, this time I feel like we’re in a spot in our career where we’re just, like, ‘No. We’re gonna go ahead and do what we want.’ And we had a good track record of doing what we want versus what other people influence us to want to do, and this song is definitely on pace to really help the album and the whole rollout. So it feels really cool.

«The next track we put out will definitely be more like ‘Another Life’ and ‘Voices’-type track,» he continued, apparently referencing «Masterpiece». «I can understand why a label would want that, because if you look at our… Just go to Spotify — I mean, ‘Another Life’ and ‘Voices’… ‘Another Life’ has double the amount of plays as the next highest song, which is ‘Voices’, and then the next highest song is ‘Brand New Numb’. So, very obviously, people can say that they want the heavy tracks and we’re going to deliver that, but the songs like ‘Another Life’ are really, at this point, I guess you would say our bread and butter, ’cause that’s what people want. So, for us, it’s, like, let’s start it off really hot and really heavy and then we’ll switch over to the more, like, here’s the singalong track that just hits you hard and… We’ll take a little break from the heavy. And we’ll circulate back. That’s what we do.»

When «Cyberhex» was first released, Cerulli said: «‘Cyberhex’ is my love letter to you, our fans, for everything you have done for me over the course of some of the most mentally taxing few years I’ve had to go through. At times where I felt like my world was ending, as well as the world around us, it was always in my mind that I was able to turn to the special relationship we have created together for help, and I cannot thank you enough for that. Outside of my own personal experiences, it has been equally as fulfilling to me to see that in the face of tireless forces that continue to try and perpetuate hatred and negativity towards so many of us coexisting on this planet, we have all stood together to resist and fight back knowing that love and compassion will always prevail. We ARE the resistance. We ARE Cyberhex. I love you. Thank you.»

«Scoring The End Of The World» fully encompasses the expanse of MOTIONLESS IN WHITE‘s dynamic, deep, and dark vision, and marks the band’s first full-length body of work in three years since 2019’s «Disguise». The latter has quietly made a major impact on rock music and culture. The single «Another Life» stands out as their most-streamed song ever with over 23 million YouTube views on the music video. The record claimed a spot on Loudwire‘s «50 Best Metal Albums of 2019,» plus it ignited the creative renaissance that would set the stage for the statement-making «Scoring The End Of The World».

Last month, MOTIONLESS IN WHITE kicked off a massive triple co-headline North American tour. Dubbed the «Trinity Of Terror» tour, the run features the unholy triumvirate of MOTIONLESS IN WHITE, BLACK VEIL BRIDES and ICE NINE KILLS and is the first time ever that fans get to see all three bands on the same stage each night. The coast-to-coast outing, which sees the three bands alternating closing sets each night, launched on March 17 in Mesa, Arizona and is making stops in Los Angeles, Chicago, Salt Lake City, Philadelphia, and more, before wrapping up with a performance at Norfolk’s Chartway Arena on April 27.

Last year, MOTIONLESS IN WHITE unleashed the standalone single «Timebomb». It has gathered 5.7 million Spotify streams and 1.6 million YouTube views on the music video. Earning critical acclaim, Loudwire hailed it as «dark but uplifting — and heavy,» and Kerrang! urged, «prepare your neck.»