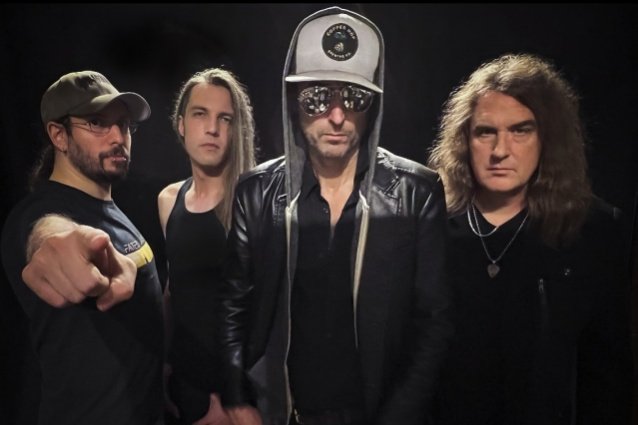 This past December, THE LUCID filmed four new music videos. Three of the tracks are taken from THE LUCID‘s self-titled debut album, which was released in October via SpoilerHead Records.

Ellefson announced the completion of the videos in a social media post. He wrote at the time: «THE LUCID knocked out 4 music videos in L.A. over the weekend. 3 songs from our debut album and one that is a total off the wall cover that will see the light of day in a few months. What a great time it was!»

«The Lucid» was produced by Heller and mixed/mastered by Lasse Lammert.

Ellefson previously stated about the LP: «It’s been a real blast making a record with these guys and I must say that it’s refreshing to explore some new musical avenues… to step out a bit from what each of us have done stylistically in our own careers. There was an effortless synergy that came with creating these songs together which is always amazing when working with new people. I’m looking forward to everyone checking it out!»

During a November 2020 appearance on «The Chuck Schute Podcast», Ellefson stated about how he got involved with THE LUCID: «Drew sent me a track and said, ‘Hey, can you throw a bass on here?’ And I was writing a new ELLEFSON solo record at the time, so my studio ears were on. I was plugged in and ready to go. He sent it over and I was, like, ‘Yeah, this is freaking cool, man.’ I’d seen Drew play, I know his BANG TANGO history and the other stuff he’s done. But this was really cool stuff that spoke to me. And then he called me up and he said, ‘Hey, Vinnie is gonna come in and write some vocals and lyrics and lay down some tracks.’ And it turned into a thing.»

«I love [Vinnie]. I love SPONGE,» David continued. «He’s such a rock star. He’s just a cool guy. And he writes such great lyrics — very trippy lyrics. He’s the type of lyricist I’d never worked with before, so it’s fun with that. And Drew is a great guitar player. Mike Heller — he’s good friends with [MEGADETH drummer] Dirk Verbeuren. And Dirk‘s, like, ‘Mike‘s awesome.’ They’re good friends. We all met in L.A. We got the songs together and we all met in L.A. in mid-July. I plugged in and banged out 10 songs in two days. And it was fun. Mike was very good in the studio; he really knows his way around.»

As for THE LUCID‘s musical direction, Ellefson said: «It’s cool stuff, and it’s very different. It’s, obviously, not thrash metal, hence the name LUCID. [The name] kind of feels like what the music sounds like.»

As previously reported, THE LUCID will embark on its debut U.S. tour in May.

Ellefson was fired from MEGADETH last May after sexually tinged messages and explicit video footage involving the bassist were posted on Twitter.

In 2004, Ellefson filed an $18.5-million lawsuit against Dave Mustaine, alleging the MEGADETH frontman shortchanged him on profits and backed out of a deal to turn Megadeth Inc. over to him when the band broke up in 2002. The lawsuit was eventually dismissed and Ellefson rejoined MEGADETH in 2010.

David, a Christian who launched the Mega Life Ministries worship group in 2007, studied for a year at Concordia Lutheran Seminary in St. Louis a decade ago.