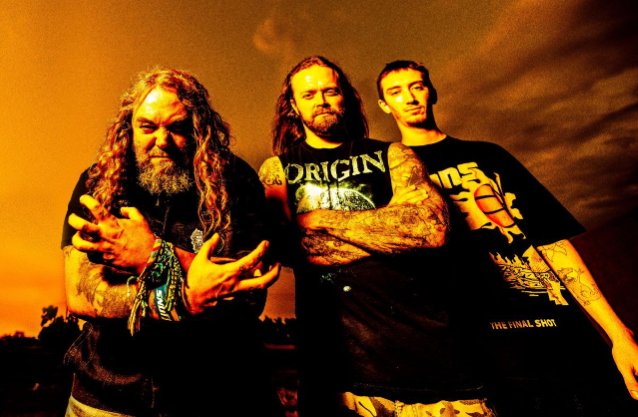 SOULFLY frontman Max Cavalera spoke to The Bogcast about the band’s upcoming twelfth album, «Totem», which will be released on August 5 via Nuclear Blast. The follow-up to 2018’s «Ritual» was recorded at Platinum Underground in Mesa, Arizona by John Aquilino and Arthur Rizk with assistance from John Powers. Produced by Max alongside Arthur Rizk (KREATOR, MUNICIPAL WASTE, CODE ORANGE),the LP boasts guest appearances from John Powers (ETERNAL CHAMPION),Chris Ulsh (POWER TRIP),and John Tardy (OBITUARY). Rizk was also responsible for playing lead guitar on the record. The artwork for the album was created by James Bousema.

The second single from the album, «Scouring The Vile», featuring Tardy, can be streamed below.

SOULFLY‘s Max Cavalera comments: «‘Scouring The Vile’ is SOULFLY‘s personal fuck-you letter to cancer! The lyrics are angered by the loss of loved ones. It was amazing to share the vocals with an old veteran, John Tardy of OBITUARY.»

Max previously told The Bogcast about «Scouring The Vile»: «We lost so many good people [to] cancer. I remember when I was writing the record, L.G. [Petrov] from ENTOMBED passed away, and Chuck [Schuldiner] from DEATH [died 20 years ago], and also family members that succumbed to cancer. And so I was, like, ‘I wanna write a song against cancer’ — a ‘fuck you, cancer’-type letter, like a letter to cancer: ‘Fuck you. You’re not gonna bring all of us down. We’re gonna fight you.’ That’s one of the heaviest songs on the record.»

Regarding the other lyrical themes covered on «Totem», Max said: «The [first single] ‘Superstition’ was inspired by Superstition Mountains. I ended up doing a lot of reading about it and the whole Lost Dutchman. A lot of people died there. It’s a really mysterious, mystic place, so I kind of made the lyrics kind of connected to that, which was pretty cool. In the actual chorus, it says, ‘Superstition is harder than stone.’ I’m referring to the mountain itself. That’s a hard mountain. It’s been there forever and probably will be there till the end of times.

«The whole record is inspired by nature,» he continued. «That’s why it’s called ‘Totem’. I don’t know if you guys saw the cover, but we’ve got this totem pole with a bunch of different animals in it. Supposedly it’s kind of like our spirit animals a little bit and our signs. There’s almost like a lion mixed with a warthog and there’s a goat with the horns. And there’s an owl, eagle on top of it. And it’s in the forest.

«So, yeah, the record was inspired by nature — the spirits in nature,» Cavalera added. «I find that fascinating. I love that. I think the desert is very spiritual and very mysterious. And also the forest. We tour a lot, so we go to Iceland and Norway, and we all see those beautiful forests and stuff.

«So a lot of the record was inspired by, I guess you’d call it the worshipping of nature, almost as a god. A lot of natives have that belief — that nature is like a god that you worship. So I think that became the kind of focus point for the record. There’s definitely songs that deal with different topics on it. Also there’s one that’s kind of a little bit about society in general, and it’s called ‘Filth Upon Filth’. It’s very, very ‘Reign In Blood’ influenced; I was listening to a lot of ‘Reign In Blood’ when I wrote that song. The tempo of it is a very killer SLAYER kind of groove. There is one song called ‘The Damage Done’. It’s about all the deforestation. I was reading a lot about the Amazon, how they’re just raping and pillaging and destroying and that’s like the lungs of the world. It’s kind of up to us at least to talk about some of these topics, so I think it was kind of cool to give it a shot.»

According to Max, «Totem» closes with a 10-minute track called «Spirit Animal». «It’s a bit like an epic kind of song,» he said. «It’s really inspired by old heavy metal tracks, like closers of BLACK SABBATH albums that were really long, like eight [or] nine minutes long, like ‘Heaven And Hell’-type shit. I wanted to write something like that. So it’s got a lot of parts — tons of riffs. It’s a riff fest. [Laughs] And it’s great, ’cause it’s also got… Richie from INCITE sings on it, my [step]son. And we’ve got Chris from POWER TRIP doing the solos on it. He’s also in MAMMOTH GRINDER. He’s a great musician. So he did the solos on ‘Spirit Animal’, and it came out sick.»

The official lyric video for «Superstition», created by Aimed & Framed alongside 3D character artist Álvar Gómez Padilla, can be seen below.

In a recent interview with the «Rez Metal» podcast, Max stated about «Totem»: «It was created a little bit different. The majority was just me and my son Zyon playing together, so we kind of wrote the bulk of the material. And then I had a great producer friend, Arthur Rizk; he worked with POWER TRIP and CODE ORANGE. Arthur is great, man. And I was curious how Arthur would make a SOULFLY record sound if he was in charge [of] it. And we created something that, to me, feels kind of like… It’s almost like a biography of Max music. We cover everything from the early days all the way… So there’s some black metal things, there’s some death and thrash, there’s some groove metal — there’s everything. So the record really goes deep into all different areas of metal. So because of that, the album feels very diverse. At the end of the day, I just wanted to make a solid, full-on attitude record that just says, ‘We’re here to fuck shit up.’ This is what we do. This is why I love playing metal, because of the energy it gives me.

«I don’t wanna describe the record too much — I’d rather have people hear it and see what they think — but to me, it feels like this is just a really, really energetic SOULFLY record,» Cavalera added. «It’s kind of cool to have that kind of… After so many records, if you can still put an energetic record out, it says something about your career; you’re not slowing down — you’re going, actually, the opposite way. So I’m more in the trenches than ever with this one. It feels like [I’ve been] rejuvenated; I feel like a young kid again playing metal. Those are great elements to have. Especially when you’re getting older, a lot of people go more mild and slow down. I’m not one of those people. I wanna just get even more wild, get heavier. But always with the SOULFLY groove, ’cause I think that’s a key element of SOULFLY; it’s always been the groove. So we pay really close attention to the… We actually added a lot of percussion to it, so it kind of goes back to records like ‘Primitive’; some of the grooves go back to songs like ‘Primitive’ and ‘Boom’, but some of the other stuff is super aggressive and it’s like a lot of the current extreme metal that I listen to right now from a lot of other bands.»

SOULFLY performed «Superstition» and «Filth Upon Filth» on its recent U.S. tour.

In April 2021, Max told Chris Enriquez of Saint Vitus Presents: Age Of Quarantine that Rizk took the new SOULFLY project «super seriously. He said, ‘Hey, Max, I don’t wanna do just another SOULFLY record. I wanna do the bestSOULFLY record,'» he recalled. ‘I was, like, ‘All right. I take the challenge. Let’s do it, man.'»

In December 2020, Max told the «Sappenin’ Podcast With Sean Smith» about the songwriting process for the new SOULFLY album: «The cool thing about Zyon, the way he plays drums, is he’s a bit like a wild animal — he has no restraint, man, and he just unleashes on the drum kit. Pure, pure brutality power drumming, and I love that. So that takes me back to a lot of the early records that I like — a lot of the old ENTOMBED stuff and CARCASS and NAPALM DEATH; out-of-control shit. So I think we have that kind of spirit going on on a lot of the new tracks.»

In August 2021, SOULFLY parted ways with longtime guitarist Marc Rizzo due to personal differences. A permanent replacement guitarist has yet to be announced. FEAR FACTORY‘s Dino Cazares played guitar for SOULFLY on the summer 2021 U.S. tour and once again handled second-guitar duties on the band’s most recent run of shows.

In June 2020, SOULFLY released a new digital EP, «Live Ritual NYC MMXIX». The effort was recorded at The Gramercy in New York City on February 11, 2019 while SOULFLY was on tour in support of its most recent full-length album, «Ritual». The audio for the EP was mixed and mastered by Charles Elliott (ABYSMAL DAWN) from Tastemaker Audio. Cover artwork was comprised of live photos taken by Rodrigo Fredes.

«Ritual» was released in October 2018 via Nuclear Blast. The follow-up to 2015’s «Archangel» was produced, recorded and mixed by Josh Wilbur (KILLER BE KILLED, LAMB OF GOD, GOJIRA).