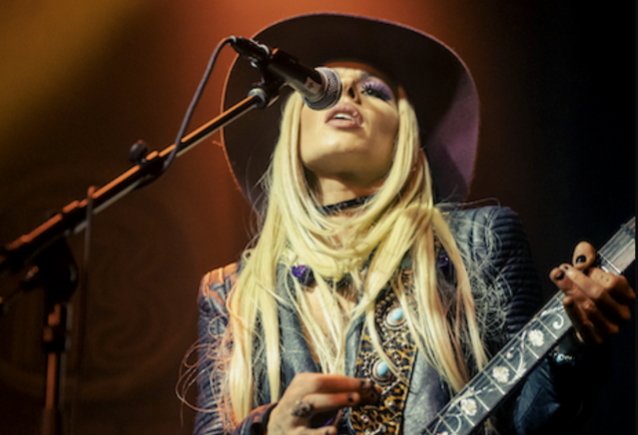 Frontiers Music Srl will release «Live From Hollywood», a new live album and long-form video from internationally renowned rock guitarist Orianthi, on CD/DVD and Blu-ray on July 15. The performance was captured on January 8, 2022 at the Bourbon Room in Hollywood, California and sees the guitarist and her excellent backing band in fine form, playing songs from Orianthi‘s most recent release «O» and cuts like her hit «According To You».

A performance clip of the song «Sinners Hymn» from «Live From Hollywood» can be seen below.

This new live release serves as an appetizer for Orianthi‘s upcoming new studio album, which will be released later in 2022.

Orianthi‘s first major solo artist success, as a singer-songwriter and guitarist, was with the Geffen Records release of «According To You», which is now RIAA-certified platinum and has over 17 million streams on Spotify. Her music’s ability to transcend time and remain relevant cannot be more clear than its recent resurgence on TikTok. There are over 83 million views on the «According To You» hashtag, making it a viral trend that is introducing Gen Z to Orianthi for the first time in a big way. Career-long fans are used to seeing their favorite world-class guitarist playing arenas with rock royalty and global superstars like Michael Jackson, Carlos Santana, Carrie Underwood, Alice Cooper and more. The juxtaposition of her newly arrived online popularity and her lifelong pursuit of artistic credibility is the nebulous of this shining star.

Orianthi‘s first new studio album in seven years and her first new music as a solo artist in six years, «O», came out in November 2020 via Frontiers Music Srl.

In April 2020, Orianthi told the «Australian Rock Show» about her fourth solo album: «I’m so excited about this record — really excited. «We did it in 28 days in Nashville. [I made the record with] Marti Frederiksen, who’s a dear friend of mine, an amazing songwriter, producer. I just go out to Nashville, where my management is at, and I love it over there. I made actually my last record too, with Dave Stewart there, at Blackbird [studio]. There’s some kind of energy in Nashville — it’s just a great feeling when you get there. So many musicians are there. And we just jumped right into the studio. Marti and I wrote and recorded, in 28 days, all the songs. And, yeah, it was just a great, fun experience.»

Regarding the musical direction of her latest material, Orianthi said: «This record is not too much of a departure from my past stuff, but it is different. So I think people will get what they sort of expect, with that heavy riffage and big solos, but there’s a lot of different sounds going on and textures, with drum loops and synths. It’s not just staying with one tone throughout the whole record… There’s some heavy tracks on there. There’s some lighter tracks [and] bluesy tracks. As I said, it’s different, but it’s kind of what people were sort of expecting.

«The thing is you have to keep on evolving and changing,» she explained. «You don’t make the same record over and over again; I would just bore the hell out of myself and everyone else. So I wanna keep on changing.»

Born in Australia, Orianthi was inspired to learn guitar at a young age after discovering her father’s vinyl collection. She rose to international fame at age 24 after the release of her hit single «According To You» and a high-energy performance backing Carrie Underwood at the 2009 Grammy Awards. Although she had already been invited to jam with the likes of Carlos Santana and Steve Vai, mainstream audiences had not previously heard of this captivating guitar prodigy.

Her recognition increased even further when Michael Jackson called with an offer to be his guitarist for his dates at the O2 Arena in London. Although the concert series was not to be, the release of the behind-the-scenes documentary «Michael Jackson’s This Is It» showcased Orianthi‘s masterful playing as well as her creativity and collaboration.